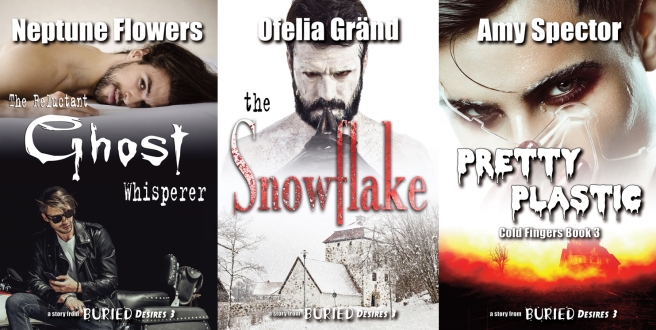 If you’re looking for something scary, something funny, something romantic – here you have it! We have a wonderful mix or ghosts, icy serial killers, and tasty young men.

“I know you’re a loon.” I kissed his cheek. “Look, why don’t you let me finish? We only have to dig a bit then we can cement over. Two hours max. You can wait in the van?”

He looked at me incredulously. “Adam, no! Don’t you see? It’s you I’m worried for. Me—I’m just a sad old fucker. No ghost’s going to want me.”

“It’ll be OK.” I pulled him down the steps, thinking the quicker we could start the better. “I promise.”

“OK, OK, but at least let me bring some protection.” I tried not to laugh as he produced the egg whisk and waved it in front like a shield. “I know how it looks, but I’m sure it made the ghost go away that night.”

“Hey, where did you—oh…” Dylan Mincer. Theo’s breath caught, but before he could smile, Dylan was glaring at him.

“Dylan.” The one breathy word shouldn’t have been audible, but for some reason, the music stopped in the exact same moment as Theo was having a verbal orgasm.

“You two know each other?” Nose-guy smiled, nodded between them, and draped an arm over Dylan’s shoulders. His brain would have looked better on the ground than in his head.

“Never seen him before, but you have, I see.” Dylan turned his glare to Nose-guy who chuckled and Theo pictured a chisel protruding from his neck.

“Nah, we haven’t met before.” Nose-guy nodded towards Theo as if he wanted him to back his story. Theo kept his mouth shut.

“Yeah, right.” Dylan signalled to the bartender. “You hurried off the dance floor and managed to buy a drink for a complete stranger before I could get here.”

The bartender placed a margarita glass with what looked like scooped ice in it in front of Theo, and he tuned out Dylan and Nose-guy. Sure it was Dylan Mincer, but a piece of ice slid down the outside of the glass, reflecting the light.

“We need to call the cops.” I fished my cell from my pocket but just stared at the locked screen.

“No we fucking don’t.” Grant pulled the phone out of my hand. “We need to go clean up that mess, burn Flora’s dress, and search the guy’s car.”

“Car?” I was so distracted I couldn’t keep up.

“Dude, if that’s the guy who’s been watching your house, his car’s gotta be just up the road somewhere. Maybe he’s got ID in there. If we can find out who he is—”

“Maybe we can figure out what the fuck he wants with me,” Jonathan finished for him.

I nodded and followed them both outside, opening the storage shed for shovels and rakes and dragging out a power washer I’d never realized we even owned. I went about the task of tampering with evidence on autopilot, remembering the similar cleanup just a handful of months earlier. Had that been Flora’s tasty young Paul Newman? I would have to ask her. I didn’t want to ask her. I didn’t want to know the answer.

More tales of love, death and love after death.

Buried Desires is back. And now there’s even more to love. From the ghostly to the grotesque, this time around Buried Desires 3 brings you three tales from horror authors, both old and new, offering up a perfect collection of romance and the macabre.

All you need is love, or so they say!

When Adam Barrow employs a fit, capable guy, life begins to look up. His business thrives from the extra muscle, and so does Adam. Being around chatty Johnny really helps the time fly past. Adam is shy and inexperienced in ways of the heart, but very soon his awkwardness eases and he finds himself flirting and having fun.

Johnny Sparrow has a mysterious past and seems to have a knack of stirring up inexplicable presences. From the day he arrives on a motorbike, weird things begin to happen, like strange noises and creepy mists. Even motorbike Angus has a personality!

All you need is love, but can Adam find the strength to confront the ghostly goings-on? Can Johnny find a use for the egg whisk, and can Angus really carry them both to safety?

A story of paranormal divas, supernatural aromas and head-over-heels romance.

Barrow and Sparrow book one.

The Snowflake by Ofelia Gränd

Theophile Lekas has spent the last seventeen years trying to build a name for himself as an ice sculptor. Ice is his world, but he lives for Dylan Mincer.

But loving from afar isn’t enough, and if Theo wants to win Dylan’s heart, he’ll need to sweep him off his feet. And what better way to do it than with a sculpture that will leave Dylan breathless and the world in no doubt of Theo’s genius?

After an argument leads to murder, Theo is hit with true inspiration. And he has the perfect block to begin his project. For Dylan, Theo will create his masterpiece. And it will be as unique as a snowflake.

Christopher Minnick is still not a zombie.

Three months after his run-in with the vampire Marcus Gråsson, Christopher’s ankle has healed but his life is anything but perfect. There are people watching the house. Flora’s worried about the scarecrow. And after an unexpected tragedy strikes, Christopher will need to figure out how to deal with the loss without tearing a rift between his brother and himself.

When Victor accepts a job with Pretty, a prestigious private hospital, to work alongside the handsome Austen Poole, Christopher ends up with one more thing to worry about. While it might seem like a dream job, there’s something not quite right in paradise, and when Vic starts acting strangely, Christopher will stop at nothing to get his man back.

When striving for perfection, you sometimes need to get your hands a little dirty.