This story is very dear to me. I’ve always planned to write a military story but never really dared to. I always figured it would need to be long so I could capture all I needed to say, but When Skies Are Gray isn’t long, it’s 16k.

And I don’t say all I need to say about having a military man, but perhaps I’ll never be able to…or maybe I’ll have to write another one.

I met my husband back in 2002 at the university. We became instant friends. I wasn’t in the best place in my life back then, but he always made me laugh, and when I didn’t have the energy for all our classmates and the life of a student, he was quiet with me.

So, since I knew this awesome guy, I tried setting him up with my sister. I figured he’d be a great addition to the family, and my sister deserved an awesome guy.

My wake up call was when he told me he was dropping out, he’d signed up to go to Monrovia, Liberia as a UN soldier. He’d already been to Kosovo a couple of years earlier, and to him, it wasn’t that big of a deal. It was only for ten months.

Without him, I was lost. The thought of him leaving me had never occurred to me. How could he? We belonged together.

And we did, still do.

He went. For ten or so months, he was away. I wrote him a letter every day – every day. He still has them.

He’s still in the army, but instead of leaving for months, he leaves for about a week at a time. And I don’t have to wait for days for him to call me, he calls every day. And I don’t write him letters anymore – perhaps I should start doing that again.

I’m married to a military guy, so why haven’t I written one single military guy during the years I’ve been writing? No country has the same rules, contracts, agreements etc as we have in Sweden, and it’s so easy to get something wrong. My husband was away for ten months. In the US, the soldiers’ contracts span over years, and other countries have other lengths. So it’s mostly fear of messing up that has kept me from writing anything army related, but now I have, and it’s all thanks to Sheryl.

When the pandemic hit earlier this year, I – like so many others – found myself in a state where it was really hard to focus. I couldn’t write, I couldn’t read, I didn’t know what to do about anything, no one did. So to get me out of my slump, I asked the members in my Facebook Group to make wishes, and I’d randomly pick something and write a story about it.

Sheryl wanted an age gap story and ‘You Are My Sunshine’ like the song. Well, it might not be anything at all what she had in mind, but we have age gap and someone to think about when the skies are gray.

Do you know the beginning of You Are My Sunshine?

The other night dear, as I lay sleeping
I dreamed I held you in my arms
But when I awoke, dear, I was mistaken
So I hung my head and I cried

The beginning of When Skies Are Gray goes like this:

Madoc Griffiths turned over on the bed and reached for the warmth that had been there mere seconds ago. When his hand slid over the cold sheet, he sighed.

An ache spread in his chest and a lump formed in his throat. He didn’t want to open his eyes, didn’t want to see the empty side of the bed, the bare white walls, or the sad clothe hooks where only his clothes hung.

If he concentrated, he could remember the dream, remember the smooth skin under his palm as he ran his hand up Levi’s arm, remember his scent. He could see the tousled dark hair as he turned over to look at Madoc, see the heat in his dark brown eyes.

With a shuddering breath, he threw off the cover and sat on the bedside. When would this stop? Fifteen months, it had been fifteen months since he shredded his every hope of happiness. The lump in this throat grew bigger, his eyes burned, and despite telling himself he’d done the right thing, the only possible thing, the gnawing longing wouldn’t go away.

It had been the right thing to do.

Reaching for his phone, he checked the time. Five minutes until the alarm would go off. At least, he’d slept through the night.

His joints cracked as he stood, and he stretched to get the kinks out of his neck. The house was silent. Empty. Everything was silent and empty since Levi had left — since he’d made Levi leave.

Walking into the kitchen, he switched on the coffee maker before heading to the bathroom for a quick shower. He hadn’t more than wrapped a towel around his hips after getting out when the doorbell rang. For a second, his heart sped up, but soon his brain caught up with him and reminded him Levi wasn’t in the country anymore, hadn’t been in the country for close to six months now.

With a sigh, he went to the hallway.

“Happy birthday!” Lisa pushed him out of the way so she could get in. The familiar scent of her perfume tickled his nose as she squeezed herself past him. A bunch of yellow roses and two purple balloons on a string in her hand.

“Lis, what are you doing here?” Madoc glanced at the clock. He didn’t have time for this.

“I only wanted to wish you a happy birthday. Go put something on. I have bagels in my bag so we can grab a quick breakfast before work.” She walked into the kitchen without giving him a second glance, put the roses on the counter, and reached for cups and plates in the cupboard.

Madoc sighed and went into the bedroom to get dressed.

“Have you heard from him?” Lisa appeared in the doorway right as he did the last button on his shirt. Reaching for a tie, he shook his head.

“But it’s your birthday.”

Madoc shook his head, not trusting his voice to remain steady if he spoke. 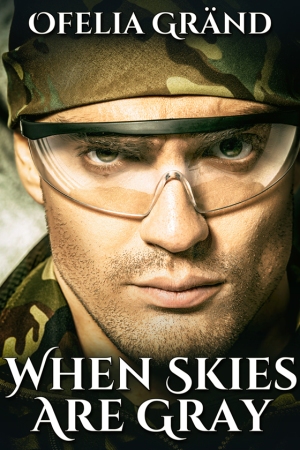 When his older boyfriend fears he’s holding Levi back from fulfilling his youthful dreams, he encourages him to break free and seek adventure. Levi, hurt and confused, does just that… But in an immature act of rebellion, he enlists in the army. The army!

Levi never wanted to be a soldier, and he never, ever wanted to go to faraway places, but he is now committed to serving his country for two whole years.

Madoc Griffiths did the right thing when he let Levi go, he knows he did, but if it was the right thing, then why can’t he move on? Every night he dreams about Levi; every day he misses him. But Levi is young, and Madoc will not stand in the way of Levi following his dreams.

But being a soldier isn’t Levi’s dream.

There is nothing Levi wants more than to do his time, and return home to Northfield and fight for his man. Madoc was sure he’d be able to move on, but once he hears Levi will be home on a two-week leave, he can think of nothing except seeing him again. But can he stand to be with him for two weeks and then let him leave to fight a war?

2 thoughts on “Release Day! | When Skies Are Gray”