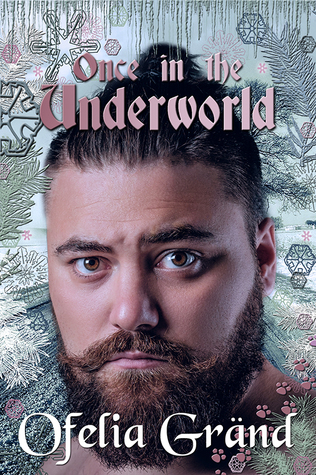 Chris Hart owns the only grocery shop in Nortown, but he isn’t exactly overrun by customers. Some days he wonders why he bothers to open the doors at all. Spending his days smiling at the few people that do trickle in and his nights alone in bed isn’t the most interesting life a man could lead. But when Chris suddenly gets the excitement he’s been craving, it may just be more than he bargained for.

Gabriel Miller loves his life. He’s close to his sister, has a job he adores and is the proud owner of one and a half cats. But all of it is taken away when he witnesses a murder and, to keep him safe, the police place him in Nortown, of all possible locations.

Chris can’t believe they’re letting someone live in his gran’s old cabin in the middle of the winter; it’s too cold. When the poor man shows up in his shop looking to buy clothes, Chris’s heart melts, despite the freezing temperature. Gabriel notices the way the shopkeeper looks at him, but it can’t be right. No one looks at a heavyset man with heat in their eyes. Do they?

When the danger follows Gabe to Nortown, it’s more than their chance at happiness that is threatened, and Chris and Gabe find themselves fighting just to stay alive.

Gabriel breathed in deep and neared the counter.

The offerings were sparse; Gabriel couldn’t see any of the pastries he’d fantasised about.

“What can I get you, love?” The red-haired woman walked past him and stepped in behind the counter.

Gabriel looked around, wondering who she was calling love, but she only kept looking at him. “Oh…erm…I’d like a caramel latte and a cinnamon roll, please.”

The green-clad man stopped talking and glared at him. Gabriel’s cheeks heated, and he started stuttering, “O-or a s-salad and a glass of water, please.” He wanted to run out of there, preferably before he was served a salad.

“Tom!” The good-looking man reached over the counter and gently pushed at the man who was still glaring at Gabriel, his tone a mix of amusement and exasperation. Gabriel wished the ground would open up before him.

“I can’t do a caramel latte, I’m afraid. Jason here—” she gave the now chuckling man a hard stare “—will make you a fake latte if you want?”

“A fake latte?” Gabriel didn’t know if he wanted that. Preferably, he wanted to run, but he was starving. “Nah, it’s okay. I’ll…I’ll…” Gabriel looked over his shoulder. The car they’d given him was right outside. He could slip out, they could laugh at the fatty who wanted cinnamon rolls for breakfast, and everything would be fine—at least, in their world. The sweater must be shrinking, because now it worked like a corset, squeezing around his middle until it was too hard to breathe.

“I can give you an ordinary coffee with milk and honey if you don’t want to try the fake latte.” The woman’s green eyes had softened since she had glared at the man…Jason? The pretty Jason, so good-looking he’d probably never had felt self-conscious in his entire life.

“Honey?” He’d never heard of anyone having honey in their coffee. His scepticism must’ve shown, because the woman started laughing—a chiming bubbly laugh.

“You’ll meet him, sooner or later.”

You’ll find Once in the Underworld here:

One thought on “Once in the Underworld (Nortown #4)”