There is this Roman myth about a luminescent snow-white bird known for its beauty and song.

The caladrius birds were kept in the King’s court, where they protected the royal family by using their healing powers. If the bird looked someone in the eye, it could take the sickness into itself and allow the person to live. Once it had taken the illness, it had to disperse of it.

But you don’t find any caladrius in the wild anymore, do you?

Nash poured yet another beer down his gullet. The sounds in the bar were so fucking loud tonight—people everywhere, the same boring people.

A young blond was trying to get his attention by the bar. Nash recognized him, but it had to be a couple of months ago. He didn’t do repeats, and the sooner the guy got the message the better.

The bottom floor where they were sitting had the decor of an old-fashioned pub, tables and chairs in dark wood, and by the windows were booths made up of black leather sofas with tables screwed to the wall. The upper floor was more like a nightclub with a dance floor and its own bar. Luckily, the DJ hadn’t begun yet.

“What’s up with you today?” Gilbert frowned at him.

“Nothing. Tired is all.”

“Tired?” Gilbert looked at Ellis as if he would object to Nash being tired, but Ellis grinned. Most of his face hidden behind the shades he always wore when they were out among people. Nash didn’t like it when he wore them.

It was easy to see if and when Ellis picked up on something when he didn’t wear those glasses—not knowing was annoying.

“Yes, tired. Not everyone wakes up at sundown, some of us have normal, tedious jobs to go to.”

“I don’t wake up at sundown and since when has being tired stopped you from being polite?”

“Gentlemen, gentlemen.” Ellis glanced at them over the glasses, his eyes shifting between hazel green and milky white. “There’s a bird in town.”

Nash frowned. As far as he knew there were thousands of birds in town. “A particular one you’re thinking of?” And since when were they ornithologists?

“You mean it’s a… vision or whatever?” What the hell could a bird mean?

“A whatever.” Ellis moved his hands like wings. “White one second, black the next.”

White? Nash pictured the guy in the coffee shop, the strange one, but he was a human, not a bird. He would’ve known if he was a shifter. Nash always sensed the shifters straight away, not that there were many. “Is it… Does it mean anything?”

“How would I know? I’m not the brain in the group.” Ellis raised his eyebrows before pushing his shades back in place.

Gilbert flashed his fangs. “I’m pretty sure I’m the stomach of the group. Can we grab someone to eat? I’m starving.” Gilbert nodded at a young woman sitting two tables away. “I’m having her, have already established the link, so whenever you guys have picked yours—”

“You’re having a woman?” Ellis pursed his lips in distaste.

“To eat.” Gilbert dragged the words out. “Not everything is about fucking, but if I was in the mood, I’d do her, she’s pretty.” He shrugged and Nash looked at the woman. She was pretty, long dark hair falling down her back in glossy waves. He never went for women, but Gilbert mixed up his dinner schedule fairly evenly between the sexes.

“Hey, I was the one trying to talk about the town’s bird problem, was I not?” Ellis sipped on his beer and looked around the room.

“Is it a problem?” Nash didn’t want any trouble…or maybe he did. Living a mundane life was fucking boring, and he hadn’t been in a good brawl for ages.

“He’s boring but go ahead.”

Ellis made a face.

“Yeah, yeah, can we get the show on the road, hungry remember.” Gilbert emptied his glass. His brown hair standing on end, looking like he’d just stepped out of bed, which wasn’t too far from the truth.

“What?” Both Ellis and Gilbert stared at him.

“You’re not in the mood to get laid?” Ellis rubbed his forehead. “Why have I been seeing a bird all day if you were gonna spring something like this on us? I don’t like being caught off guard, Nash. It’s no way to treat a friend—especially not a psychic friend.”

Nash sighed. “I had no idea we were friends.”

Ellis gave him the finger which made Nash feel a little better. “It’s not a big deal, I’m just tired.” 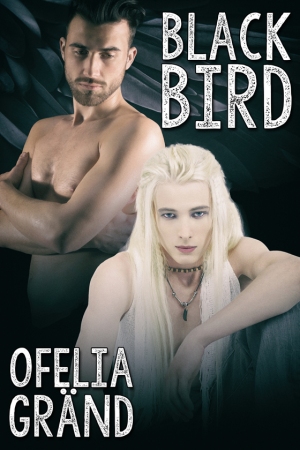 After seven years of being on the move, Arlo Barman wants nothing more than a place to call home. But unbeknownst to him, Arlo is a caladrius healer, so staying in one place has never been an option. The compulsion to separate himself from those he’s healed is all-consuming and leaves him little choice but to pack up yet again.

Nash Silver is the only werewolf in his small coastal town. Living undetected in a human world is imperative for his kind, and he and his small circle of friends—a vampire and a psychic—have done so for decades. But Nash’s anonymous existence is jeopardized when a man with an enticing scent moves into town. From the moment Nash lays eyes on the stranger, nothing is more important than being close to him. Not even guarding his secret.

Arlo isn’t interested in a relationship or even a date, his past has taught him nothing good comes from it, but the rather pushy local popping up everywhere he goes has his heart somersaulting. If his heart is somersaulting or not doesn’t matter, because when Nash gets injured, Arlo is the only one who can save him.

Having used his powers, Arlo has to leave Nash and the cozy town he wanted to make his home, but can Nash survive being separated from his mate?