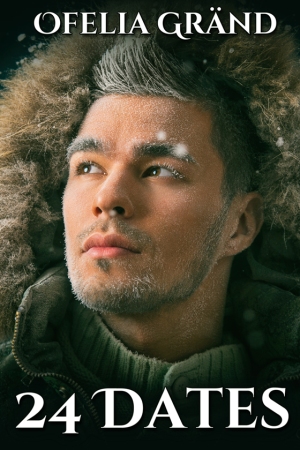 When Victor Hill bought a house with his boyfriend, Jian Kouri it was a dream come true. But now, two years later, instead of living their happily ever after, they hardly see the other awake.

With Jian out the door before Victor gets up in the morning, and asleep on the couch nearly as soon as he walks in the door, the life Victor imagined couldn’t be further from reality. They don’t talk; they don’t touch, and Victor fears he and Jian have already drifted too far apart.

The holiday season is a time for hope, but when Victor comes home to find Jian with a plan to woo him for Christmas, is it too little, too late? The dates are great, and there are filled with Christmas fun to get Victor in the right spirit for the holiday, but are they enough for the two of them to fall in love again? Or is there just too much in their relationship that needs fixing?

Victor waved at Jonas and Sara who were having coffee in the staff room and put his lunch box in the refrigerator. He hadn’t opened it to see what Jian had packed. Thank God it’s Friday. He wasn’t sure he had the energy for another workday.

Last night had been awesome, but he was so tired. It didn’t help that it was pitch black outside, and so cold he feared his nuts would be forever damaged. He fired up his computer and got ready to answer the phone.

The sick reports would start to roll in any second. There were probably a number of them on the answering machine already. After New Year, they’d have a new system where he wouldn’t have to answer the phone. It would be a service where the guardian (or whoever called in) would tap in the student’s social security number, and it would report it directly into the system. It would be great if it worked, since the first hour of his day always went to reporting absences, but he doubted it would be as simple as they made it sound.

The morning flew by, people came and went, the phone rang nonstop, and he was busy, busy, busy. His stomach growled for the first time about an hour before his lunch break, and it only got worse. He hoped Jian had packed something filling or he’d be a snarling mess for the rest of the afternoon.

Friday afternoons were often calm, and he had a stash of chocolate in his drawer for emergencies, but right now he wanted food. The clock went in slow motion.

He jumped to his feet one minute before the start of his break—no one would notice one minute—then the phone rang. Snarling, he reached for it and answered in a polite tone he was more than a little proud of. A parent wanted a copy of the absence report for their child, and Victor emailed it to them. Finally! He hung up and more or less jogged to the staff room.

Snatching the lunch box from the refrigerator, he tore off the lid while praying for something he needed to heat. For several seconds, he stared at a piece of a plank, sawed to perfectly fit his lunch box. What the fuck?

Abe Cooper, the gym teacher, peeked inside the box and chuckled. “What are you having today?”

Victor stared at him. “I’m hungry, like really hungry.”

Abe chuckled and took the box from his hands. He tipped it over on the counter, and Victor groaned when he saw Jian’s writing on the side that had been against the bottom. You’re late for our date, I’m waiting in the parking lot.

What the hell was Jian up to? A year without one single date night, and now he’d done something for Victor four days in a row. It couldn’t all be because he’d accused him of not wanting to spend time with him, could it?

He took the plank and the box, dropped them off in his bag in his office, and grabbed his jacket. He spotted Jian’s pickup right away, and hurried over there, yanking open the door on the passenger side.

“Jian, what the… Oh…” There was tinsel on the ceiling, a tiny Christmas tree fastened to the dashboard, and the truck smelled of… McDonald’s?

“Welcome to restaurant Jian, the greasiest joint in town.”

“McDonald’s? Where the heck did you go to get burgers from McDonald’s? And why aren’t you at work?”

Jian looked away. “I finished early, I picked the food up in Courtland, and I’ve kept it in a cooler bag, without anything cooling, of course, all the way here. I hope it’s still warm.” He opened the packed cooler.

Jian scowled. “No. I didn’t know what you wanted, so I bought a little of everything.”

“I can tell.” Victor laughed. This was bizarre.

“Don’t laugh. I wanted to do something you wouldn’t expect.”

“Wood in my lunch box? I never would’ve guessed.”

“Well, I’m aware of not bringing you a lot of wood lately, so…”

The quick flash of teeth filled Victor with warmth. He loved it when Jian smiled.

“No, you’re outside of work.” He grew serious. “I’m sorry, Victor. I know this isn’t what you signed up for. I never… I believed it would be so much easier.”

Victor nodded. He too had assumed everything would be easier. Buying a house and living there with Jian was all he’d ever dreamed of—and a dog. He’d love to be a dad one day, but he’d convinced himself he’d settle for a dog if starting a family proved to be too hard.

Now, he’d settle for a loving relationship with his partner.

Popping a chicken nugget into his mouth, he nodded at Jian. Things didn’t always turn out the way you planned. He swallowed, reached for one of the cups in the cup holders, and took a sip—Coke.

“This is awesome. I love how you’ve pimped your truck.”

Jian grinned. “I know how much you love Christmas, so I figured some tinsel would get you in the right spirit, not to mention the fancy lunch. Nothing screams Christmas like a soggy burger.”

Victor chuckled and shook his head. Jian had no sense of Christmas.

Half an hour went by too fast when you didn’t want it to end. Victor wiped his fingers on a napkin. “I have to go back, but I’ll see you at home.”

“Actually…” The nuggets formed a knot in Victor’s belly as Jian grimaced. “I have to go to Whiteport. Dave has property there, and he needs some help, so I’m going straight down there to fix a thing.”

Dave had a… Was Sara leaving? He hadn’t heard anything about any teacher quitting. “Are they moving?”

“No, no, he’s renting it out, but there are a few things that need fixing, and I promised to help.”

“I’m sorry.” Jian’s eyes filled with regret. “It’s only for today, I promise.”

Victor nodded. Only for today for that thing, tomorrow it would be something else.

“I promised him a long time ago, Victor.”

Victor frowned. “Is that what all this has been about? Take me out on a date so I won’t complain when I’m lonely on a Friday night?” The joy over the week died and left a bitter taste in his mouth.

“No! No. I miss spending time with you. That’s what it’s been about.”

Victor nodded and reached for the door handle.

Jian sighed and ran a hand through his short, black curls. “I’ll see you tonight.”

Victor nodded but suspected he’d be asleep by the time Jian got home.

24 Dates in the JMs shop