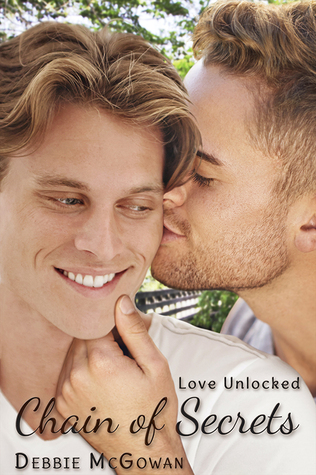 Last but far from least in the Love Unlocked anthology we have Chain of Secrets by Debbie McGowan. This sweet, gentle read made me aware of there being something out there called love hearts sweets—we do not have them here in Sweden, or I have at least never seen them. There’s this cute little game Josh and George play in the story with love hearts that made me smile.

Josh and George have always shared the special bond of friendship. From days in primary school, to holidays spent riding their bikes along the canal, theirs is a promise to remain best friends forever.

But can that promise withstand the trials of adolescence, and the changes in their feelings towards each other?

NOTE: this is a fully stand-alone story, but it contains significant spoilers for anyone reading the Hiding Behind The Couch series, and should be read after The Harder They Fall (season three).

They stopped, chained their bikes together and collected their sweets and drinks before they clambered up the concrete slope. They often had a rest under this viaduct. Not that he’d told Josh, but George liked to think it was their secret place that no-one else ever came to. It wasn’t special, just a road over the canal. But it got them out of the sun, and it was a good place to rest up before they rode the last mile home.

For a few minutes, they lay on their backs, catching their breath and cooling down. Josh reached into the bag of sweets, pulled out two lollipops, and held one out to George. Sitting up straighter, George took the lollipop, and Josh settled back, with his hands behind his head and his knees up, using the traction of his shoes to stop himself from sliding down the slope. He rolled the lollipop around, and the stick slid from one side of his mouth to the other.

George was transfixed. The stick switched sides again. A car rumbled overhead. The sugar left a glossy coating on Josh’s lips, and George wondered what they would taste like, how it would feel to press his lips to Josh’s and…kiss him. George’s heart was hammering in his chest at the thought. He wanted to kiss Josh, more than anything else. He wanted to taste the lollipop on his lips, lick the stickiness away. He wanted it so much he couldn’t stop watching the stick bobbing. He could just reach over and snatch that stick, pluck the sweet from Josh’s mouth, and kiss him.

Josh looked at him in puzzlement. Had he said something?

“Huh?” George asked. His cheeks were burning. The moment had passed, and for now the desperate urge to kiss Josh was lost.

George replayed that moment all the way home, and for days, weeks, months afterwards. He couldn’t seem to get the thought out of his head. He had wanted to kiss Josh. He still wanted to kiss him. Did he know? Could he tell what George was thinking?

At Ellie’s house, Josh got out of the limousine and gasped at the sight of his friend in her beautiful, long blue dress. She smiled and blinked back tears. Three years of fighting bulimia, and counting. Josh could see the pain, hidden behind her flawless make-up and slight yet shapely figure. Another item to add to the list of things that must not be allowed to ruin what might be their last night out together, forever.

Josh waited for Ellie to settle into her seat and sat next to her. He could feel George watching him. The finality of the occasion threatened to overwhelm him, and he waited until George’s attention had shifted before glancing his way.

George. His best friend. The boy with the bubble of blonde hair, the little ruffian with the rusty bike.

George. The tall, handsome eighteen-year-old, star footballer with his own horse.

Lifting the champagne flute to his lips, George tilted his head back to take some of the fizzy golden liquid into his mouth. He met Josh’s gaze, swallowed and smiled. A concerned smile. Josh smiled back. Suddenly, the enormous car was too small, the cooled air was too warm, George was too close, too…beautiful. How had he never noticed before?