This week I’ve picked up Line of Sight by Jenn Burke. It’s another story from the Goodreads M/M Romance Group’s Don’t Read in the Closet event, this time from 2015’s Love is an Open Road Anthology.

I haven’t read anything by Jenn Burke before but I liked this short little Sci-Fi tale. Cal has been stranded on Earth for a year, he’s in love with the man who took him in when he first arrived, but while he still was waiting to be rescued he doesn’t want to start anything. Ryan lost his husband in a car accident and is hesitant to start a relationship. But things happen, Cal’s past is coming back to disrupt Cal and Ryan’s lives, and they find themselves fighting for survival.

This is a quick-paced short story with a little of everything – love, action, aliens, you almost died!!!, and more. Be sure to check it out. You find it for free here. 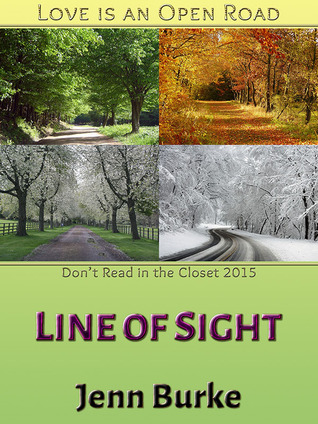 Betrayed by his alien partner, it takes intergalactic cop Cailad kar Natoth a full year to accept that he’s stranded on Earth. Rescue just isn’t going to happen. He’s now Cal Smith, a bartender of all things— but the situation could be worse.
Out from under the pressure of regulations, he has a chance to explore the emotions he’s always kept tightly controlled. Ryan Cameron, the man who offered him shelter and a job when he needed it most, once held up the chance to be more than friends— and now that Cal’s sure he’s staying, it’s time to take him up on it. Maybe they can see if the lust and desire ricocheting between them is the start of something more.
But Ryan’s lingering grief over the death of his husband five years before— and an unexpected visitor— might steal their future before they have a chance to build it together.