It’s time to introduce Quincy Dean –  William Johnson too, but this story is told from Quincy’s point of view. It’s not how I usually write, but this story was written for an in-house call about dating during social distancing, and the stories should be between 5 and 12k. Now, I usually don’t have a problem writing short stories in dual pov, but I was struggling to find William’s voice and complained about it to my morning writing buddies, and they suggested telling the story through Quincy alone.

I’ll do a post later on with a scene from Will’s pov that I cut when I decided to give Quinny free rein.

So, Quincy Dean… My dear Quinny (Stop calling me that!) isn’t the most aware guy you’ll ever meet. In two seconds flat, he’s created a perfect picture of the world, and it takes a lot to get him to see it in a different light. He has a very patient best friend who tries to make him see reason without much success.

William Johnson moved to Whiteport for a job, but with the pandemic hitting, he finds himself with nothing to do during lockdown. When a guy named Quincy begins talking to him online, he finally has something to do, and he loves chatting with Quincy over a cup of tea. Everything goes perfectly until Quincy asks him out on a date. 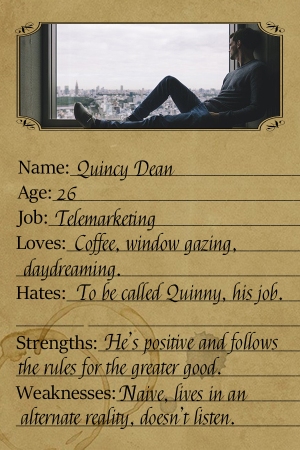 This story was so much fun to write!

Quincy Dean is one lucky guy. After months of virtual flirting, he’s convinced the man of his dreams is living next door. True, they’ve never spoken face-to-face, and William Johnson has never posted a picture of himself, but how many William Johnson’s could there be?

Quincy is positive the two of them would be great together. But if he’s ever going to get the chance to convince Will of that fact, he’s going to need to do it before his perfect man figures out he’s too good for Quincy’s little corner of Whiteport and disappears from his real life forever.

But how do you woo someone when you have to stay six feet apart? Direct messages are great, but they aren’t very romantic. And when Quincy begins to notice that Will’s messages don’t always match up with what he’s seeing through his blinds, he worries that even online he and his dream guy are drifting apart. Six feet or not, it might be time to ask Will out on a date.