The ‘Write a Wrap-Up Wednesday post’ came up on my To-Do, and I thought to myself that I haven’t read much this month, but checking my notes, I realised I’ve read a few stories.

Day Job by Domashita Romero – Louis is seeing things, has always been seeing things, so when the new guy – Gabriel – starts at his work, he knows he’s a demon. Or he thinks…no he knows. It’s right there in the strange eyes and the tailed shadow.

He tries to expose him, but it’s not going very well, and then one day at a super boring meeting, Gabriel sneezes on Louis – so pre-covid LOL – and things get complicated.

This have no cover and no blurb, but you can read it for free here.

Sympathy for the Devil

Sympathy for the Devil by RoughDraftHero – Sedated alien in a glass box (made me want to write an alien Snow White story LOL) and Milton’s job is to watch him and give him a dose of sedatives at midnight every night. When he notices the alien reacts to sounds, he starts playing music and reads out loud, but that only gets him transferred to another department. The last night he’s working, he ‘forgets’ to give the alien his dose of sedatives…

Milton is a low-level employee for the government. All night, he watches over the most prized-possession of the secret laboratory he works in, hoping one day he would be able to see its eyes. However, he finds out something shocking about the subject he’s been monitoring, and starts to feel a small flicker of guilt.

That was probably his first mistake.

Hot Coffee & Terrible First Dates by K.P. Maxwell – Cute short story about a dog shifter and an owl shifter going on a blind date. Charlie knocks over his cup of coffee and it all falls in Derrick’s lap. It’s adorable and funny. Epithets, though…

Derrick’s not really into dating, so when his coworker sets him up on a new app that promises to match him with another shifter, he’s ready to delete the profile and be done with it. He didn’t expect to get matched with the adorable, nerdy guy on the other side of the screen. When curiosity gets the best of him and he decides to meet the man at Café Seuil in Southeast Portland, will hot coffee and the cold, snowy weather make him give up on dating altogether? Or could this be the start of something wonderful?

The Frog in the Room

Thomas Adler is a stickler for neatness. When his ordered life goes completely to the frogs, what’s a man to do? Grab hold of the closest frog shifter and hang on for dear life, of course!

Beneath the Neon Moon

Beneath the Neon Moon by Theda Black – Two men chained up in a basement. One had one too many to drink the night before the other was attacked by a huge dog…or was it a wolf? I enjoyed this! Dark and evil. My only wish is that I would’ve wanted a confrontation at the end, but after some snooping around on the author’s website, I realised this is a series, so maybe that will come in the next book.

Zach and Mal have never met, but one summer night finds them in desperate trouble together, kidnapped and trapped in darkness. The moon’s rising high and full in the sky when Zach notices something’s changing in Mal, growing volatile and wild. And no matter how quickly the bond between them grows, Zach’s afraid he won’t survive the night.

Growl4Me by Haylee Wolf – A dating app for shifters! It was the title, I admit. I don’t know when I picked it up, but I remember seeing the title and thinking it sounded fun. I do like me a shifter story or five, and this was all right, but it could’ve done with some editing. I’m terrible when it comes to spotting typos, but here were so many even I couldn’t miss them. Still, a cute alpha omega story. 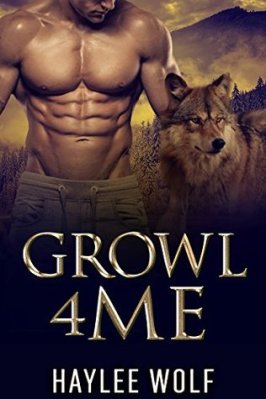 Warren Kelly’s dream is simple. He wants to find a mate who’ll accept him for who he is. But it’s not that easy. Warren isn’t like most Omegas. His ordinary looks and quirks put off most dominant wolves. Signing up on the social network app Growl4Me will change his life…except Warren attracts the wrong kind of attention.

Inked, scarred and huge—Noble is a lone Alpha who has no trouble getting whatever and whoever he wants. But something’s missing in Noble’s life and that’s a mate. Warren claims they’re too different, that they’ll never work out. But Noble craves no one but his sexy pie baking and cat owning shy Omega. Noble doesn’t take ‘no’ for an answer and he’ll do everything to make Warren understand who he rightfully belongs to.

Chapter Five and the Axe-Wielding Maniac

Chapter Five and the Axe-Wielding Maniac by Marie Sexton – It was the title that made me read it! It’s a short, cute, quick read about an author in a slump who one morning comes eye to eye with an axe-wielding maniac. The maniac wants to break his living room floor open. It’s cute! 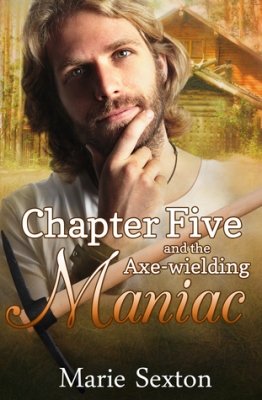 Author Joshua Franklin Hill has a bad case of writer’s block. When an axe-wielding maniac knocks on his front door and asks to dig up his living room floor, he figures his Monday from hell is complete.

But an axe-wielding maniac may be just what Josh needs.

Too Stupid to Live

Too Stupid to Live (Romancelandia 1) by Anne Tenino – I was writing a blog post about funny books, and ended up re-reading this. Sam makes me laugh. He’s obsessed with romance books, and he wants himself a highlander, and he finds him! A football to the head, and when Sam comes too, there he is. The highlander turns him down, though…at first, at least LOL 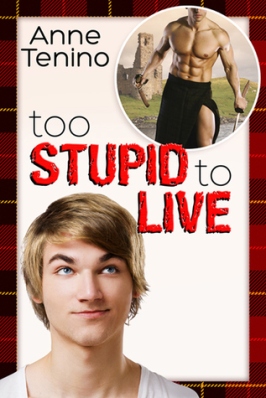 It isn’t true love until someone gets hurt.

Sam’s a new man. Yes, he’s still too tall, too skinny, too dorky, too gay, and has that unfortunate addiction to romance novels, but he’s wised up. His One True Love is certainly still out there, but he knows now that real life is nothing like fiction. He’s cultivated the necessary fortitude to say “no” to the next Mr. Wrong, no matter how hot, exciting, and/or erotic-novel-worthy he may be.

Until he meets Ian.

Ian’s a new man. He’s pain-free, has escaped the job he hated and the family who stifled him, and is now—possibly—ready to dip his toe into the sea of relationships. He’s going to be cautious, though, maybe start with someone who knows the score and isn’t looking for anything too complicated. Someone with experience and simple needs that largely revolve around the bedroom.

Until he meets Sam.

Sam’s convinced that Ian is no one’s Mr. Right. Ian’s sure that Sam isn’t his type. They can’t both be wrong . . . can they?

Touch Me Not by Genna Donaghy – This is also a re-read. It’s an alternative universe where everyone is either dominant or submissive, and you have true mates. Jake is a sub, but he doesn’t want a dominant in his life. All he wants is to run his farm as he sees fit. But… there’s a strange man in town, and he touches Jake.

In an alternate universe, where gender is less important than how dominant a person is, Jake Alric is the odd man out. While other subs spend their days trying to find their one true mate, Jake goes out of his way to avoid dominants. He’s seen the dark side of soul bonds, and all he wants is to be left alone to tend his small Montana cattle ranch in peace.

When an oil company starts buying up land all around town, Jake comes under increasing pressure to sell. A chance encounter brings him into contact with one of his potential mates, Henry Waterstone, son of the man trying to buy Jake’s ranch and a handsome dominant who pushes buttons Jake didn’t know he had. For the first time Jake is tempted by the true pleasure of being a submissive. But as Jake and Henry grow closer, a new player in the oil company rises up and threatens to sever their fragile connection. Suddenly the person Jake was most afraid to find becomes the one he’s most terrified to lose.