I thought I was gonna have to panic-read a short story or four just to have something to write about today, but a quick scroll through the library shows that nope, I’ve read a few stories this month. Not many, but more than I thought I had.

I’ve been working my day job, writing, have had baby chicks hatched, have a garden that’s starting to come to life – I didn’t think I’d taken time to sit down and read. Sometimes I surprise myself LOL

Blind Tiger (The Pride #1) by Jordan L. Hawk – I love me some Jordan L. Hawk. This takes place in Chicago during the prohibition and I just love the world Hawk creates. It takes place in the same universe as the Hexworld stories, so we have witches and familiars. It’s awesome! Mobsters, murders, bootleggers – what else could you wish for?

1924, Chicago. Prohibition is in full swing and gang bosses rule the city with might—and magic.

When Sam Cunningham flees his small-town life to try his luck in the big city of Chicago, he quickly finds himself in over his head in a world of gangs, glitz, and glamour. Fortunately, he has his cousin Eldon to teach him the trade of hex-making.

Everything changes the night Sam visits The Pride speakeasy and meets grumpy cheetah-shifter Alistair Gatti. After losing his first witch to the horrors of the World War, Alistair isn’t interested in any new entanglements, romantic or magical. Especially when said entanglement comes in the form of kind, innocent Sam.

When Eldon is brutally murdered, Sam becomes drawn into the dark underworld of the Chicago gangs. Sam must find the missing hex Eldon created for one of the crime bosses—before whoever killed Eldon comes back for him.

Together, Alistair and Sam begin the search for the mysterious hex, diving deep into the seedy side of Chicago’s underworld while dodging rival gangs. And as they come to rely on one another, Alistair realizes he’s falling for the one man he can’t afford to love.

Unhallowed (Rath and Rune #1) by Jordan L. Hawk – Once I finished Blind Tiger, I went searching for the next book in the series only to realise it hasn’t been released yet. So I went on to another first in a series where there only is one book out, so far. Tentacles! Not my go-to type of monster, but a haunted library! How awesome that? I loved this one! 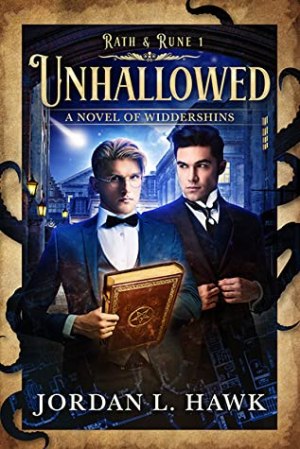 Librarian Sebastian Rath is the only one who believes his friend Kelly O’Neil disappeared due to foul play. But without any clues or outside assistance, there’s nothing he can do to prove it.

When bookbinder Vesper Rune is hired to fill the vacancy left by O’Neil, he receives an ominous letter warning him to leave. After he saves Sebastian from a pair of threatening men, the two decide to join forces and get to the truth about what happened to O’Neil.

But Vesper is hiding secrets of his own, ones he doesn’t dare let anyone learn. Secrets that grow ever more dangerous as his desire for Sebastian deepens.

Because Kelly O’Neil was murdered. And if Sebastian and Ves don’t act quickly enough, they’ll be the next to die.

Unthinkable (Tate Pack #1) by Vicktor Alexander – I went from Jordan L. Hawk to wanting me some werewolves. I knew this was a gamble. I’ve read a story or two by Alexander before and they haven’t resonated with me, sorry. This is a rather short story about a dancer whose best friend passed away a few weeks ago and now her brother the werewolf comes to tell him they’re to raise her babies together. I just… eh… no, I won’t read any more of the Tate Pack books. 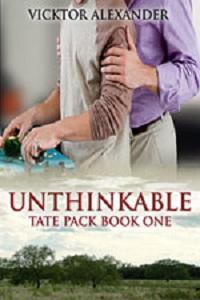 Richard Tillson was happy with his life…well…sort of. He has spent the last few years of his life making a name for himself in the dance community, has a very expensive apartment in Manhattan and he knows he’s gorgeous. So why is he so miserable?

Enter Vernon “Vet” Tate. The older brother of Richard’s best friend Amanda Lynn. The first time the two men meet it’s when Vet is saving Richard’s life from an oncoming vehicle. Moments later Vet is turning Richard’s life upside down by telling him that his baby sister, who had passed weeks before, left her three newborn children to Richard, to share custody with Vet.

Things wouldn’t have been so bad for Vet, a wolf shifter, if Richard wasn’t also his mate, his very human, very male, mate.

So how will Richard cope with becoming a father, giving up his sophisticated New York lifestyle for a ranch out in Wichita Falls, Texas, and finding out that not only do shape shifters exist, but he’s the mate of the Alpha?

Finding the Wolf (The Dragon’s Hoard #1) by Mell Eight – Dragons aren’t my favourite monster either, but I figured why not? Nyle is a 300 yr old dragon who has to find a missing prince. He does and sleeps with him within minutes, there the story lost points in my world, but then we got to meet Nyle’s mother and it got better again LOL. Nah, this is an all right story, it has dragons and werewolves, magic and evil parents, not to mention eccentric parents. And a dragon needs his pretties 😀

I read an old copy of this, and when I went to grab the cover, I saw that it will be re-released by Nine Star Press on June 11.

When Prince Leon disappears, his people turn to the dragons for help. Nyle is the unlucky dragon tasked with finding Leon, a duty he dreads as it forces him into the confounding human world and far away from his collection of pretties.

Locating a missing prince should be a simple matter, but if Nyle has learned anything about humans since being forced among them, it’s that they needlessly complicate everything. When he finally locates the errant prince, however, what Nyle finds is a treasure worth all the complications—and worth protecting at any cost.

Mummy Dearest (The XOXO Files #1) by Josh Lanyon – I read Lanyon now and then, she’s huge and I often have this feeling that I should’ve read all of her books because… I should, you know? To know my genre or whatever. Not that I write that many mysteries. And I really liked Winter (The Haunted Heart #1) but most often I get through these books with a shrug. Don’t get me wrong, they’re good, but they don’t stick with me. Here we have a mummy princess and a guy who breaks up with his partner via phone and jumps into bed with another guy half a breath later.

The truth is out there. Way, way, way out there!

Drew Lawson is racing against the clock. He’s got a twenty-four-hour window to authenticate the mummy of Princess Merneith. If he’s not at his boyfriend’s garden party when that window closes, it’ll be the final nail in their relationship coffin.

The last thing he needs traipsing on the final shred of his patience is brash, handsome reality show host Fraser Fortune, who’s scheduled to film a documentary about the mummy’s Halloween curse.

The opportunity to film a bona-fide professor examining the mummy is exactly the aura of authenticity Fraser needs. Except the grumpy PhD is a pompous ass on leave from his ivory tower. Yet something about Drew has Fraser using a word he doesn’t normally have to draw upon: please.

With no time to waste — and a spark of attraction he can’t deny — Drew reluctantly agrees to let Fraser follow his every move as he unwraps the mummy’s secrets. Soon they’re both making moves behind the scenes that even the dead can’t ignore!

The Last Pure Human by Twisted Hilarity – I didn’t mean to re-read this, but I… erm… Yeah, well, cat aliens! LOL This story has everything I dislike, almost. I wrote a post about my pet peeves in romance books a couple of weeks ago, and this has most of them – really it does.  And while reading it again, I was thinking ‘damn, I should’ve added sleep sex to my pet peeve post’ so that’ll tell you something. I don’t know what it says about me, but while there are soo many things that annoy me (Max referring to himself as the girl-guy *growl*) about this story, I secretly love it. As an escape from everyday life, why not go to a planet far far away 😀 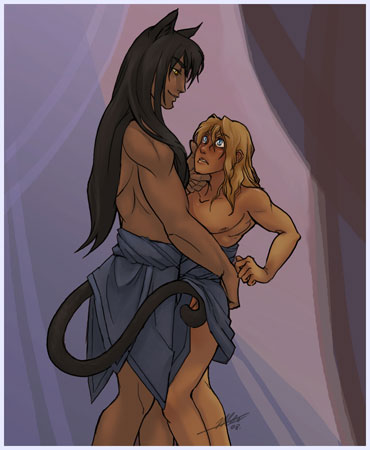 Kasan, a prince of the feline Kyashin race, is in deep shit. He’s in heat, he needs a consort to help him survive it, and his uncle has locked him away from every available candidate. When he’s offered a small human male at the last moment, he’s quite happy to accept. His new consort, on the other hand, is a little less than pleased with the situation. So what’s a human to do when he finds himself in the bed of a hot, sexed-up alien? We’re about to find out.