A little while ago, I talked about the Publishing Partner program JMS Books has where they help struggling authors, such as myself, distribute self-published stories to platforms where it otherwise can be hard to find an in.

Now, it’s time for Scary Gary to find new shelves to sit on.

I wrote Scary Gary as part of a project I never finished. I had this idea of writing twelve short stories in a year, one for each month. Elevator Pitch was one, Scary Gary another, and that was how far I came. So I published them without any connection to each other.

Scary Gary is a freebie, 5.3k long, and it’s about a grim reaper called Gary LOL

Gary glanced out the window. “Maybe I should get going.” His skin shone white in the dark, the scythe was leaning against the backrest of the sofa, and the hood of the cloak was pushed off his head to reveal short black hair and chiseled features.

Micah bit his lip, wanting to demand answers but also knowing that if he didn’t change the topic Gary would leave. “You’re such a coward.”

So something about Micah scared Scary Gary. That couldn’t be good. “Tea?”

“It’s a chilly night, I figured we could use something warm and soothing. Or is tea too lame for the lord of the underworld?”

Micah laughed at the exasperated look. Gary’s snort only made him laugh harder. “I’m sorry, it must be stress.” Tears gathered at the corner of his eyes, but he blinked them away. Why was the world pressing down on him today? Gary was here; Gary made all his problems go away.

Gary’s arm curled around him. “You’ll be the death of me.” The words came in a whisper close to his ear. Time slowed and Micah wished they could stay like this forever. Gary’s strong arm wrapped around him, his body a little cooler than would be considered normal, but not cold. His scent made Micah’s nose tickle. It was a mix of lemon and burning wood, nothing that could be bought in a bottle.

“I thought you were already dead.”

Micah looked up into those electric blue eyes. “Me too.” The frown was small and quickly concealed but Micah saw it. “Won’t I?” Wouldn’t he? It wasn’t fear spreading in his gut, not exactly, but he couldn’t deny the unease.

“As long as I have any power, you will.”

“Gary.” It wasn’t a whine, but close. Micah pushed against Gary’s chest to get away so he could pace, but the arm around his waist didn’t budge. “What are you doing?”

Gary touched his lips to Micah’s, and he forgot how to breathe.

Micah Thaxter has a problem — one scary, inconvenient problem. His shadow wants him dead and isn’t shy about it.

On the plus side, it’s not his time to die and Scary Gary is always there to carry him back to the land of the living. Gary is far too pale, his black cloak a bit out of fashion, and his scythe quite terrifying, but he’s still one of the most beautiful men Micah has ever seen.

Micah may be stuck with a homicidal shadow, but perhaps there’s a way to keep Gary around too. His job escorting souls keeps him busy, but since Micah has already died once today, Gary’s there. So what’s the harm in offering him a cup of tea?

It’s been a year since the pandemic hit. I don’t know how it’s been for you, but I’ve hardly been working at all, and my guess is that after we’re through the vaccination, we’ll have an economic depression on our hands. I know it angers some people to say so, but life won’t go back to normal as soon as the last person has been jabbed – at least, I don’t believe it will.

Maybe you, like me, are on a tight budget. Maybe you feel like you can’t afford to spend money on books right now. May I suggest the library? Libraries are great, and if you’re in the US you have some awesome library apps that allow you to read ebooks and listen to audiobooks FOR FREE (check out Hoopla and Libby).

But if you, like me, is in some backward country where the library apps aren’t that good, there is a ton of free books out there. Sooo many they get buried underneath other free books.

I thought I’d give you ten, and they’re not in any order of preference, but we ended up with twelve. These may be my favourites, but there are others worth reading, too. I was a bit undecided about how to organise them, but we’ll give it a try like this.

That’s 75 if I’ve counted correctly. Looking at them, I feel like I’ve missed a bunch that should be on this list, and maybe some should be replaced, but this is how I’ll leave it for now.

Friday again! This week I’ve read Sluggo Snares a Vampire by Rick R. Reed. It was just what I was in the mood for and I might have laughed at the end…I’m sure that says more about me than the story, though.

Sluggo hangs around a lot of chatrooms looking for love. He’s presenting himself as Sir Raven, a wild-eyed Cuban stud, in reality, he’s not that much of stud. But, despite his receding hairline, a man takes interest in him. They’re chatting and then things turn weird.

I loved how this story turned creepy really quick. A good horror story where vampires don’t sparkle and piercing fangs don’t result in a mind-blowing orgasm. Not that I mind those kinds of stories now and then, but sometimes it’s nice when the monsters stay evil.

This is a free story (for now at least) so give it a go! 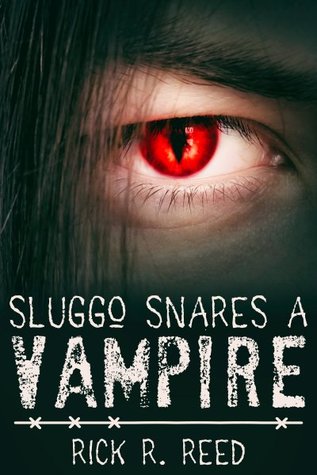 When Sluggo cruises online chat rooms, he isn’t looking for a hook-up; he’s looking for love. But love has a way of being elusive, especially when you’re not being honest. Presenting himself as “Sir Raven,” Sluggo promises his chat room cohorts he’s the “master of the night.”

And then he meets someone who challenges him — someone who claims the title “master of the night” as his own. TepesAllure’s enigmatic and flirtatious messages to Sluggo start out as fun banter, but quickly turn to eerie disquiet.

As the night unfolds, so do the advances of TepesAllure … and even when Sluggo tries to escape, he finds that getting out is not nearly as easy as getting in.

NOTE: This story appears in the author’s collection, Unhinged.