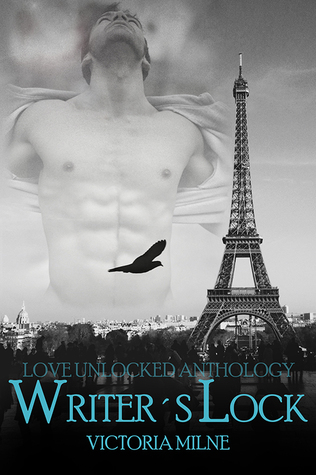 Writer’s Lock by Victoria Milne is the second story in the Love Unlocked anthology. Phil is in Paris to write a romance novel but the words aren’t coming to him. Laurent sees him and offers to show him Paris to help him find inspiration. I’ve never been to Paris but it felt like I was there while reading this story. It’s sweet, a little sad, but it left me smiling.

The lovely cover is made by Shayla Mist.

Spending a month in Paris to write his romance novel had seemed like the perfect plan, but one week in, Phil Pearson is suffering from a severe case of writer’s block. With barely a word written, he’s fed up and ready to cut his trip short.

When Laurent Marceau sees Phil in his café, it sends him hurtling into the past, opening old wounds and reminding him of the love he lost. But, after watching the aspiring writer struggle for inspiration, he surprises himself by offering to show him Paris through the eyes of a true Parisian.

Finally bursting with ideas, Phil is delighted to put pen to paper, albeit badly at first. As the writer finds himself falling in love for the first time, Laurent knows he needs to decide quickly if he’s strong enough to return his affections, or whether it would be better for them both if he walked away. He knows he may not have a choice, once Phil finds out the truth.

Phil Pearson tilted his head, contemplating the blank pages of his notebook, and a dark lock of hair skimmed his eyes. Still nothing. Yet again, his mind was totally blank—an alarmingly familiar feeling. He squinted hard, blurring the faint, ruled lines into thick, grey barriers.

So much for coming to Paris for inspiration; he’d barely written a word in the six days since his arrival. Leaning back in the rickety, wooden chair, he slammed the notebook shut, sighed and gazed out of the café window at the tourists bustling past in the warm, evening sun.

He felt like such a fraud. How could he legitimately call himself a romance writer, when he was in the city of love and still struggling to write anything of significance? His fingers trembled as he smoothed condensation from his beer glass. His inexperience of love was certainly shining through. He had to prove he could do this, for his own sanity if nothing more. Surely, it shouldn’t be this hard.

Phil peered blankly at the waiter, who smiled and repeated in English.

“Can I get you anything else?”

Phil shook his head, and the waiter took a step closer—a little too close, Phil noticed—as he glanced at his notebook.

The waiter indicated towards the empty chair opposite, and Phil shrugged his acquiescence, catching the delicate scent of the man’s aftershave as he took his seat. “You’re a writer?”

“Trying to be,” Phil said with waning conviction.

Studying him, the waiter pursed his full lips. “You cannot wait for inspiration to come to you like this. Sometimes you have to go out there and create it for yourself.”

Phil snorted a laugh. “You really think I’m going to take advice about inspiration from a waiter?”

His companion’s chair legs noisily scraped the tiled floor as he stood and gave Phil a long, hard stare. “Perhaps you should not be so quick to judge on appearances. Most things are not as they seem at first glance. You could learn a lot about inspiration from me, if you were not so arrogant.”

Phil stared at the man as he walked away, horrified with himself. He’d been so caught up with his own woes and torments that he’d unwittingly committed the one sin he despised most in others: not only to judge someone negatively but to do so with no thought as to whether it were true, or deserved, even.

The waiter was preparing coffee behind the bar, and Phil looked at him more closely. His shoulder-length, auburn hair was tied neatly into a ponytail, and he had the physique of a long-distance runner, or perhaps a cyclist. The sleeves of his crisp, black shirt were rolled to his elbows, and a wooden beaded necklace graced his throat. The more Phil watched the man’s practised movements, the more intrigued he became, and also more embarrassed.

Draining his beer and packing up his things, he stood and walked the short distance to the bar and placed the empty glass down with a thud.

“I’m sorry about before,” he said and slid twenty euros across the bar. The waiter glanced over his shoulder and made to open the cash register, but Phil shook his head and began to walk towards the exit. “Have a drink on me.”

Phil spun to look at him and was studied with a guarded smile.

“How would you like to know Paris through the eyes of a true Parisian?”

Phil eyed him cautiously, and the waiter strolled over.

“This is not true Paris,” he scoffed and waved his hand at the tables of tourists. “You will never feel inspiration here. Allow me to show you Paris, the places we Parisians go. If you cannot write afterwards, I guarantee it was never meant to be your passion.”

Phil considered his offer for a moment. “Okay, you’re on.” He scraped a lock of hair from his eyes and held out his hand. “I’m Phil, by the way.”

“Philippe, it’s a pleasure to meet you. I’m Laurent.” He leaned forward, ignoring Phil’s outstretched hand, and kissed him on both cheeks. “But we should start right away, and I know exactly where we’ll go. I’ll get my coat and tell Luc I’m leaving.”

Phil hovered by the doorway, wondering what exactly he’d agreed to. He’d just put what felt like his entire future in the hands of a complete stranger. To his surprise, instead of feeling apprehensive, he was excited to see where this journey would take him.