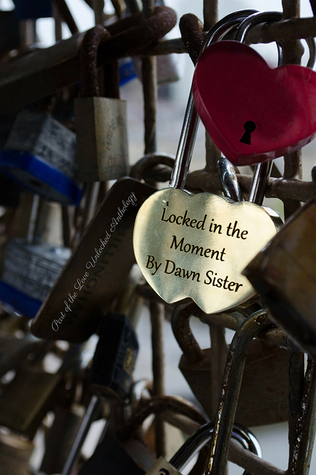 The third story in the Love Unlocked anthology is Locked in the Moment by Dawn Sister. This story is something out of the ordinary, it’s my first troll story (I think at least) but that’s not what makes this magical though it helps. It’s funny and sweet, a bit sad, and so worth reading.

Due to a misunderstanding, the troll that lives underneath one of the most romantic bridges in Paris inadvertently unlocks every single padlock lovers have left there over the years. L’Authoritié de Fée Folklorique are up in arms. He has no idea what all the fuss is about. The noise was driving him mad. He just wanted a bit of peace and quiet.

A spell is cast, leaving the troll in a bit of a predicament. He is charged with the seemingly impossible task of fixing the locks before the spell can be reversed and he is allowed to return to his home. There are other complications, the least of which is the insistence and persistence of a fairy who is determined to help him against the wishes of his own people.

Now the troll has a dilemma. What is more important to him? The only home he has known for two thousand years, or a fairy he has just met?

Lucien’s hiding the fact that he looks like death warmed up with some sort of spell. It’s none of my business, except it did shock me. I don’t want this lock business to cause him any pain or make him ill.

I don’t have time to think about it—or about when I stopped being a selfish old troll and started thinking of someone else instead of myself.

Lucien has us all over the park in search of couples to mend. Despite the fact he looked exhausted for the split second his guard was down, he seems to be driven, like one of those new-fangled car contraptions that rumble over my bridge, day in, day out.

By the time midday approaches, we have fixed twenty-four locks. I don’t think that’s bad going. I do think it’s time for a rest, though.

I still can’t work out how he’s finding these locks, but I’m not going to knock it.

I continue to be completely and utterly underwhelmed by these ‘moments’ that are supposed to be so pivotal and crucial to sealing the bond between two humans in love.

So far, I have witnessed humans realising their undying love over laundry, wire mesh shopping baskets, a tatty old book, a crossword, a pair of worn-out shoes, a scarf, an umbrella and a squashed spider. It’s tedious. For goodness’ sake. I don’t know much about romance, but I’d like to think I’d have a bit more imagination. I’ve come to the conclusion that humans are quite boring.

We are currently sitting on a bench, people watching. Lucien shifts restlessly beside me, mostly because I’ve made him sit here. I might be tired after traipsing around this park fixing lost loves, but he must be exhausted. He’s never stopped.

He clicks his tongue in frustration at the forced rest.

“We ain’t shiftin’, Hairy, so you can stop all that shufflin’ around.” I lean back on the bench, folding my arms across my chest, just so he gets the message that I will not be changing my mind.

“But we need to move around, Sol. We should be in amongst the crowds to find broken couples.” He grumbles beside me, but he doesn’t try to get up.

“If we sit here long enough, the crowds will pass us. We can search just as well from this bench. I ain’t moving another inch. My feet are bloody killing me.” They’re not, but he doesn’t need to know that. He thinks it’s because I’m not used to walking around on human feet, and it was a good enough ruse to get him to sit. “I haven’t walked around this much since the Romans left a thousand years ago.”

He snorts and regards me with sparkling eyes. “Truly?” He sounds dubious, but I can also see wonder in his expression. “You have lived through so many ages, Sol. You must have a great many stories to tell.”

“Not really.” I stare off into the distance. “I slept through most of it, and when I was awake—when I wasn’t being chased around with pitchforks or persecuted by goats—I spent most of my time underneath, or in the vicinity of my bridge. This—” I wave my hands about me “—is the furthest I’ve been from my bridge…erm…ever, actually.”

“That is quite sad, Sol. Because of others’ ignorance, there is so much you have missed.” Lucien lays a hand on my arm, and I fight the urge to jump a mile, because it still sends shocks and tingles through my entire body every time he touches me. Sometimes, I wonder if it wouldn’t be better to keep in physical contact all the time; then the sensations might be lessened.

I take his hand from my arm and hold it in my lap.

“I don’t feel like I’ve missed anything, Hairy. I’m not a very adventurous troll. In fact, bridge trolls as a species aren’t all that adventurous. We prefer to stay close to our bridges.”

His hand feels tiny in mine, and warm, and soft. I need to keep talking.

“What about fairies? I expect you get about a bit more because of the wings thing.” I point at his back and then inwardly groan, because it’s not like he doesn’t know where his bloody wings are.

Lucien shifts his shoulders a little but doesn’t answer. When I chance a sideways glance at him, he is staring down at his hand in mine. Slowly, he turns it, so our palms are facing. His fingers link through mine, and my breath catches in my throat. Maybe holding his hand wasn’t such a good idea, because now I have tingling shocks and I can’t breathe. I pull away, and Lucien gives a small huff, narrowing his eyes before gasping and turning his head to stare over to the other side of the park.

“There, over at that bench.” He points, and we are back in business, looking to fix our twenty-fifth lock.