It’s Friday, and I’m still immersed in the Channeling Morpheus series. I’ve reached Tainted which is the fourth story in the series and am right now in the middle of some blood sucking in a fitting room.

I’ve said it before, but I really like Jordan Castillo Price’s way of writing. I only have one small complaint, and that is that I would’ve wanted a little more focus on the plot. I get that it’s erotica, but I really believe these stories could’ve gained from a few more sex-free pages. Not that I mind read about what Wild Bill does and wants to do, I’d gladly bleed for him too, but still LOL. There are some amazing characters that we’re only brushing upon on our way to the bedroom, but that’s erotica I guess.

I like that we get both Michael’s and Bill’s POV in these stories, not in the same story (so far at least), but that the novelettes have different POVs. I can only assume that the staking will continue now that Bill got Michael a pink new toy. Off to see more bad vampires and to lose myself in the mix of sex and blood! 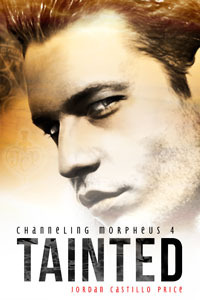 Vampires agree that vampirism must be spread through sex, because if a bite on the neck could turn someone, the world would be overrun with legions of bloodsuckers by now. So Wild Bill’s been careful. The last thing he’d want is to turn anyone. Especially his boytoy.

Despite Wild Bill’s caution, Michael’s looking pale and thin…more so than usual. He wears it well, just like the leather jacket, the black-dyed hair and the eyeliner. But for someone as starved as he is, food should hold more of an appeal. And is that a preternatural grace Bill detects in Michael’s movements?