I’ve been in a reading slump lately, nothing has felt inspiring, and I’ve been bored with the same old, same old. A day mostly without internet (electricity issues) left me with some reading time, though, and it was so nice to let myself get sucked into a story. I read both an old horror favourite, The Sandman by E. T. A. Hoffmann, and Suki Fleet’s Just Like Heaven.

When I read YA/NA it’s most often by mistake. I’m not one to read blurbs very closely…or at all. I look at covers and reviews when I hunt for new books so it happens that a college boy ends up on my TBR-list, but most often I avoid anyone under the age of twenty-five and am very happy when I find MCs who are in their forties. But, there are a few authors who make me pick up NA books voluntarily—Suki Fleet is one, Claire Davis and Al Stewart another.

I love Suki’s writing, the way she builds characters but maybe even more how she is able to put me there on the snowy streets. It shouldn’t be missed!

Just Like Heaven is a sweet wintery tale, not as angsty as the other Suki Fleet books I’ve read, but really nice. It was first published as part of the Wish Come True Anthology in December 2015. Proceeds from both the anthology and from Just Like Heaven as a standalone go to charities working to support homeless youth in the UK and the US. So if you’re ready to jump into the Christmas reads, this is a great place to start! 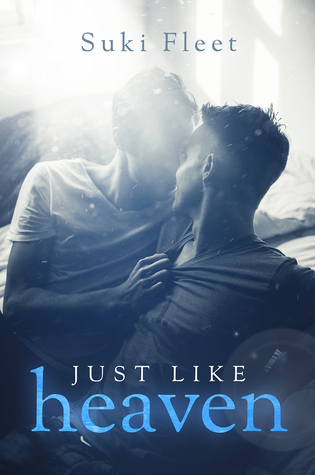 One rainy night in December, David helps a busker with pretty eyes get his stolen money back. He doesn’t imagine the strong attraction he feels is mutual. But after overcoming his shyness, David discovers Jess is definitely interested.
Jess just isn’t interested in anything but a one night stand. Or maybe two. Falling for David is definitely not part of his plan. But when David gets trapped in a snowstorm the night before Christmas Eve, Jess realises a night or two is never going to be enough.

Proceeds of this sale will be divided between two UK charities working to support homeless youth: Shelter and Centerpoint.