After weeks of having read werewolf stories, I think I’ve reached a point where it’s time to look for something else. I’ve just finished His Unclaimed Omega (The Mountain Shifters #1) by L.C. Davis and it’s totally my own fault for not reading the blurb before starting the book.

It’s a fast-paced story and if you have a thing for sheltered Omegas, true mates, Mpreg, and all of that, then this is a story for you. I steer clear of Mpregs when I can so when I realised where the story was going (in the very first pages) I considered putting it away, but then I thought I could at least give it a chance. I did, I finished it.

I’m absolutely certain many will love this, they’ll love Cameron and Barnabas, and the way they put words on their love for each other – I’m, however, not the right audience for this book. I love werewolves and l love them even more when their emotions are bottled up and never see the light of day.

This story is for you romantics out there! 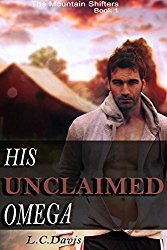 When the idyllic Silver Lake pack is struck by tragedy, young omega Cameron wants nothing more than to use his healing abilities to restore peace to his home — and his alpha. Can he convince Barnabas of what his heart has always known before he’s given to another alpha?

Barnabas is a one-man kind of alpha and when his beloved mate and omega is taken from him, he’s left an empty shell. Cameron’s gentle strength and unfailing devotion might be what it takes to save him, but Barnabas sees claiming another omega as an act of treachery. Despite his best intentions, Barnabas’ instincts as an alpha without an heir are pulling him in the direction of the young unmated omega he’s sworn to protect and find a mate of his own. Giving Cameron to the alpha of a neighboring Council pack is the only way he can do right by the orphaned omega and keep the vow he made to his fallen mate so long ago, but can Barnabas’ heart withstand the pain of losing yet another omega he loves?

When the elder of the Council makes a shocking decision about Cameron’s destiny, the Silver Lake pack is thrown into chaos. Cameron is getting what he’s always wanted, but he soon learns that being claimed by his alpha in name only is a worse fate than being held at arm’s length. Only time will tell if Barnabas can shed the heavy weight of his guilt to claim the omega who belongs to him, or whether his pain will be exploited by the brutal Mountain Ridge pack that has designs on Silver Lake territory — and its unique omega.

Grief, love and passion combine to give Cameron a crash course on what it means to be an omega. Luckily the young wolf understands better than anyone that love heals wounds that even time can’t touch.