I stayed up way past my bedtime reading Worth a Shot by Lyra Evans. Something about this story hooked me and I just kept on reading even though I should be sleeping.

It’s a paranormal mystery. Detective Oliver Worth is a wizard who is trying to solve a murder that looks like it’s been committed by a werewolf. When he gets into the land of the werewolves to question them, he meets Connor Pierce an alpha in Logan’s court.

I would’ve given just about anything to get Connor’s POV. Don’t get me wrong, I liked Oliver, but Connor *swoon*.

This isn’t the first werewolf/wizard story I’ve read. It isn’t even the first this month – I read The Duality Paradigm by Lia Cooper just the other week – but I had a hard time putting Worth a Shot down.

If you’re into werewolves and wizards, pick it up. There are three books in the series and I regret not buying the box set. 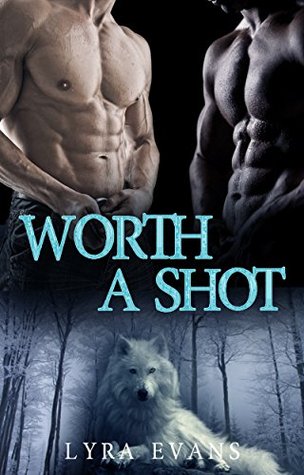 Detective Oliver Worth has everything he needs—the job he always wanted and a knack for picking one-night stands. When a high-born Witch is found murdered on the steps of Nimueh’s Court, Oliver is given the case of the century—because no one else will touch it. Not when it looks like the murder was committed by a Werewolf.

The Treaty between the Courts of Nimueh and Logan has stood for over a hundred years, and peace was hard-won. If a Werewolf is responsible, the murder counts as an act of war and would plunge both kingdoms into chaos. Something Oliver’s Captain is keen to point out.

Treading lightly, Oliver has no choice but to venture alone into Logan’s Court to investigate. The trail of clues leads right to Connor Pierce, a newly minted Alpha of Logan’s kin. Connor is gorgeous and captivating and absolutely a suspect. Determined to do his job and catch the killer, Oliver finds he’s now got more to worry about than an inter-kingdom war. He tries to ignore his growing desire, but Connor keeps drawing him in. Everything about Connor is intoxicating, and Oliver isn’t sure how long he can fight off temptation…

Now there’s not just the peace of two kingdoms on the line—there’s also his heart.

Worth a Shot is a M/M paranormal mystery romance with Werewolves, Wizards, and explicit sexual content. First in a series but can be read as a stand-alone. No cliffhangers.