I think one of the reasons I write is that it lets me create a reality different from my own. I’ve always been one to read a lot of paranormal books – urban fantasy, a little sci-fi, a few ghost stories, the occasional horror story, too. I love the raised stakes in a paranormal world, not that this world isn’t terrifying enough but at least you don’t have to fear for vampires when walking the dog at night.

Reading about supernatural beings helps me escape my own reality and sometimes I need a break. I love my life, but some days the laundry pile seems a little too high, the dirty dishes overtake the kitchen, and it feels like I’m not doing anything except preparing food, on those days I willingly let a werewolf drag me away from the normal world.

But, I fear, that if I would be part of a magical world for real I’d be like Eldred Henstare…or worse. Eldred is my newest character, and he’ll see the light of day on January first. Eldred is a not so powerful witch who will teach you to always carry salt and preferably your twin brother wherever you go. He’s very dear to me, but…and there is always a but, isn’t there? Things don’t always go the way Eldred had planned.

Eldred Henstare rubbed his neck for the hundredth time since he’d left home. The strap of his messenger bag dug into his shoulder, and the salt and candles in it grew heavier and heavier with each step. A long time had passed since he’d jumped off the bus and started walking.

The wind whipped his face; raindrops bounced off his skin with enough force for him to suspect they were hail. He shivered under his too-thin jacket and cursed his stupidity of not donning rainwear. The ghost calling him wouldn’t care what he was wearing, and the risk of running into a living soul out there was minimal. To this day Prince Charming had never appeared when he’d been out chasing ghosts—one day he would, though. With Eldred’s luck, it would probably be the ghost of Prince Charming he’d have to guide into the light.

He sighed and shielded his face as he climbed a dune and was greeted by the white foam riding the crashing waves of the sea. A thread of moonlight managed to shine through the clouds, and he stopped to catch his breath for a second…or five.

The ghost Eldred is chasing isn’t Prince Charming, it will lead him to a living man instead. Mo Vin is living in a small cottage next to the old lighthouse and normally he doesn’t get visits on rainy nights.

Mo stared at the stranger. There was something not right with him. As he held the door open, the man drew a sign in the air, blew out a breath, and then crossed the threshold.

“Rough night?” Mo took in the soaked clothes, his reddish hair clinging to his forehead, and the wide hazel eyes. He was young, smallish, and entirely out of place in Mo’s cottage.

The man shrugged. “Not the best night for a walk in the moonlight.”

He had that right. “Do you want me to call a taxi for you? Or perhaps you have someone who can come pick you up…your mother?” How old was he? He could still be living with his parents.

“My mother? No thank you; I’m trying to avoid her at all costs.”

“Oh…” Mo tried to decipher the look the man gave him.

“Yes.” Mo crossed his arms over his chest. He didn’t need some kid judging his home. It wasn’t much, but it had been in his family for generations, and he loved his cottage.

“Oh, there is no luck in the world, is there?” The kid grinned, and Mo ignored the way heat rushed to his groin. He was far too young for him anyway.

I had a laugh writing this little story,  Eldred managed to capture my heart without me noticing. Worth His Salt is the second story in the Tattooed Corpse series, but you do not have to have read the first story (Pink Slip by Amy Spector) to read it. The Tattooed Corpse series is a series of short stories which all have one thing in common, and only one thing – the same body appears in each story – apart from that, anything can happen. 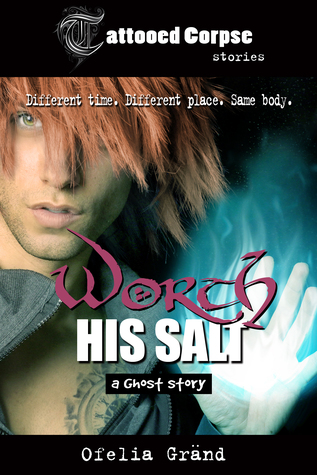 Eldred Henstare is a not so powerful witch who’s been left in charge of helping the city’s lingering spirits to move on. He usually handles it pretty well, but something’s wrong with the spirit leading him to the abounded lighthouse.