JMS Books has this series called Hot Flash, that’s stories between 2-5k. I found Invisible by Iyana Jenna on my phone and it’s a Hot Flash. It’s not very old, was published in June 2019, so I must’ve grabbed it pretty recently, but I can’t really remember doing so. It doesn’t matter – I had it, and I’ve read it.

It’s my first Iyana Jenna story. She mostly writes sweet romances, so don’t expect a lot of grunting and grinding – don’t expect any, because Invisible isn’t that kind of story.

Daniel Matthews sees a young man approaching a hot dog stand, handing over his last bill with shaking hands. The young man gets his hot dog, but as he walks away, he collides with a group of bullies and falls to the ground. The hot dog is knocked out of his hands and the group laughs as they walk away.

Daniel is furious and rushes over to help the young man and ends up taking him out for some pizza.

This is a cute hurt-comfort story about a man helping the homeless and a young man accepting the help…if a bit reluctantly at first.

It’s short, 3.5k, so there isn’t much room to play on. I liked the story, and I understand the need for a time jump to get to the epilogue, but I wished we could’ve ‘seen’ the development on-page. 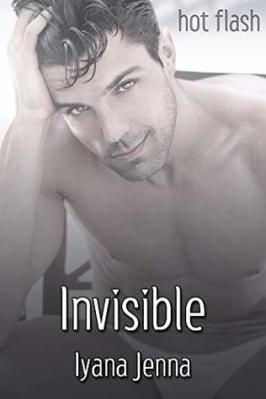 Daniel Matthews lost someone dear in the past. When he sees a young man lose his fast food dinner to a couple of bullies, he ends up buying both of them a meal. To his surprise, Liam reminds Daniel a lot of his brother, gone too soon. But the feelings Liam rouses in Daniel are definitely not the same.

Daniel offers to take him home, but Liam lies about which house is his has no home. He has nothing. Or had … until Daniel.