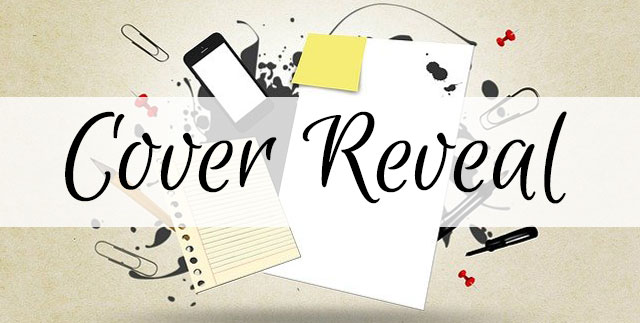 Exciting news! Today we’re doing a double cover reveal. Both Holly Day and I got shiny new covers this morning, so we figured we’d do a thing.

These two stories are vastly different. Kisses and Cabins is a short contemporary friends to lovers story, and There Will Be Aliens is – well, there are aliens LOL

Holly wrote There Will Be Aliens for Extraterrestrial Abductions Day that’s on March 20th. I wrote Kisses and Cabins because I wanted to do something short and uncomplicated. It was after I’d written Soul Eater so I needed to clear my mind. 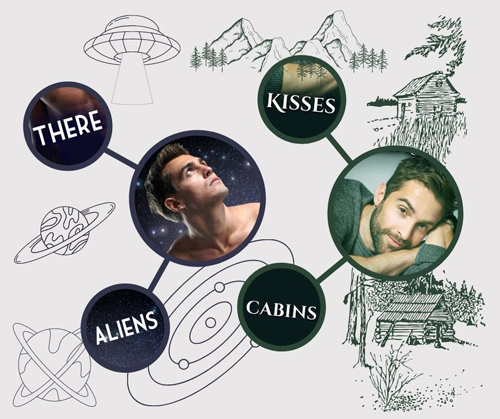 We thought we’d each share a really short excerpt about how our main characters meet. In my case they’ve been friends for over thirty-five years so it won’t be the first time they meet, but the first time in the story.

“Yes?” The cold March air teased his bare skin. Outside stood Lukas Holland, his best friend since kindergarten. “Luke, what are you doing here?”

They hadn’t seen much of each other lately. Kace didn’t know what it was, but Stacy, Lukas’ girlfriend, disliked him—a lot. Could be because he was queer, or maybe because he worked at a gay club without being ashamed. She’d said something about it once. You tell people you work there? And then she’d widened her eyes and shaken her head, not at him, but at Lukas.

“Can I come in?” The slurred speech and the way he stumbled told Kace he was drunk before he smelled the fumes.

“What’s up, dude? You’re drunk on a Monday afternoon.”

Excerpt There Will Be Aliens:

Then the man nodded, and as he took a step forward, the female jumped down on the other side of the strange wide outdoor chair. She ran.

Zenon nodded at Brox. “Anek, follow in case there are more earthlings around.” He took a step forward, and when the man tried to hit him, he caught his arm and secured him—though careful not to touch any of the pale skin in case it was covered in poison—and slung him over his shoulder. He’d expected him to weigh more. He was short but didn’t look unhealthily thin, so he should’ve weighed more.

“Where are you taking him?” Ghurva gave him a curious look—no one he’d ever met could give curious looks except Ghurva. Another sign he wasn’t like most Negudade.

Are you ready to see the covers? *drum roll* Here they are!

Kace Channing has been best friends with Luke Holland for thirty-five years. He can’t imagine his world without him. But, over the last twelve months, they’ve hardly seen one another. And life without Luke seems empty.

When Luke shows up on Kace’s doorstep, asking for a place to stay, Kace is happy to say yes. But he isn’t prepared for the kiss that follows, or ready to admit that he could kiss Luke forever. What they already have is too important.

And when Luke, the least outdoorsy person Kace knows, tells him he’s buying a cabin in the woods, he tries to talk him out of it. But Luke’s made up his mind. He says they need it, the two of them.
But won’t kisses and cabins ruin their friendship?

Carlo Russo is having the worst day. Not only has he lost his job, caught his boyfriend cheating, and had one too many shots with his best friend Grace, now he’s seeing aliens too. Big, black, tail-equipped aliens. After a futile struggle, he and Grace find themselves on a spaceship leaving Earth.

Zenon Scoreceds Qhainqons doesn’t know what it is about the earthling male. Their mission is to bring back ten females in hopes of them being able to provide their planet with children, but he wants the male. What he’s going to do with the male, he doesn’t know, but he’s claiming him as his payment for going on the mission.

Carlo doesn’t approve of kidnapping, but the aliens aren’t too bad, and once the language chip is installed, he finds it entertaining to talk to them. Zen in particular. They’re standoffish and never show any emotion, but Carlo has no problem cuddling up next to Zen at night.

All Zenon wants is to spend time with Carlo, but it’s his job to get them all home in one piece. Will he be able to keep Carlo safe from all the dangers lurking along the trip? He has to because Carlo is his, and he’s not letting him go.