It’s release day!!! The Cake Shop is a short story I wrote for JMS Books’ Rain or Shine call. It’s one of those calls where we get to pick one or the other and write a story about it.

Since I did The Drunken Dog for the last either-or call, I figured I’d continue with someone else from the Halfhide pack. This time we get to follow York through a rainy April night.

He ends up with one of my favourite kinds of characters to write – a slightly neurotic, grumpy bear shifter. And on top of everything else, he’s a baker. Torbjorn, the bear shifter, that is. Everyone in the Halfhide pack is a carpenter.

The mates aren’t carpenters and we’re starting to get a few mates in the pack now. Sam, Roarak’s mate, works in a coffee shop, and Otis, Zev’s special someone, is a former rockstar thinking about becoming a bartender.

I’m doing my best to make these stories standalone even though one of the main characters is a member of the pack. I’m having a lot of fun with it, so I hope I’ll have the time to continue. 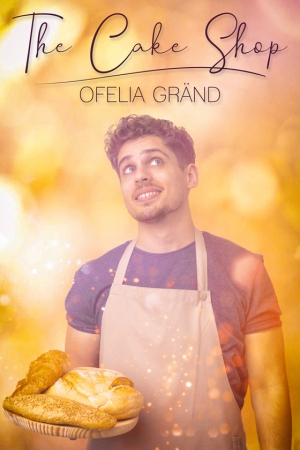 Torbjorn Holt looked down at the injured wolf shifter on the floor of his bakery and took a step back. No. There was a pull in his chest, an urge for him to go closer, but he wouldn’t.

“What do we do?” Alexandra, one of his human employees, stared at him.

“Throw him out the back, and we’ll pretend we never saw him.”

“Torbjorn! We need to call an ambulance.”

“He’s not.” Torbjorn peeked over the counter. The man had dark hair, broad muscled shoulders—of course, he did, he was a shifter—and a steadily leaking wound on his arm. “He’s resting.”

Alexandra glared at him. “He’s been attacked by a dog.”

“Torbjorn!” She got to her feet. “I’m calling an ambulance.”

“No! They’ll think we’ve poisoned him with peanuts.”

Alexandra stared at him as if he’d gone insane. “There is blood all over him. I doubt they’ll think is nut allergy.”

“The customers, not the EMTs.”

She shook her head and gestured around. “There are no customers.”

“And there won’t be either if they think we kill people in here.” Not that Torbjorn would mind—an empty bakery was the best kind of bakery.

“He might have family who’s wondering where he is.”

Torbjorn looked out the window, almost expecting to see thirty angry wolves ready to storm his den. He shuddered. He hated wolves. He hated all kinds of shifters, but wolves were the worst.

Deeply buried memories wanted to be let out, but he slammed his memory vault shut.

Alexandra gaped at him. “Why? He’s dying.”

Torbjorn gritted his teeth. He was not dying. They—and with they he meant Alexandra—should check how badly hurt he was, but he doubted the wolf was anywhere near dying. They never died. Bastards.

Carefully, he moved around the counter. His hands ached with a need to touch; blood pooled in his groin which had his stomach turning. He would not desire a wolf. “Slap him.”

For a second, he feared Alexandra was having a stroke since her mouth was hanging open, but then she snapped it shut. He jumped at the sound.

“I can’t believe you. You want me to hit an injured man?”

“No one has died from a little slap.”

Torbjorn curled his fingers into fists. “Fine, I’ll do it.” His legs almost gave out as he neared the man. He was most likely playing possum. The moment Torbjorn let his guard down, he’d pounce. Slowly, he took a step closer.

“You’re not gonna slap him, are you?” Alexandra wrapped her arms around herself.

“Rabies.” He couldn’t tell her it was a wolf shifter sprawled on the floor or that he was likely to attack them first chance he got. Healthy shifters were unpredictable, injured ones were insane. He had a better chance of surviving than Alexandra did, though. “You should go home. I’ve got this.”

She folded her arms over her chest. “I’m not gonna let you hit some poor guy over the head with a rolling pin. I know you dislike people, Torbjorn, but that’s a step too far even for you.”

“I’m not gonna kill him.” Then the place would be swarming with wolves. He might club him on the head with the rolling pin, drag him out the back, and leave him to wake up by the dumpster. There was no harm in that.

With a deep breath, he poked the guy with the handle of the rolling pin. His eyelashes fluttered briefly. “See, he’s fine.”

Torbjorn shouldn’t have looked away. One second, he was making sure the man wasn’t moving, the next he was looking at Alexandra. A hand curled around his wrist and white light exploded in Torbjorn’s mind. A shout tore from his throat, and he swung the rolling pin. He hit the hand shackling him and his own arm over and over. The impact would leave bruises, but he didn’t care.

“Torbjorn!” Alexandra pulled at him and managed to get hold of the rolling pin. “What the hell is wrong with you?”

Torbjorn realized the wolf had let go after the first slap, and Torbjorn had been hitting his own arm for no apparent reason.

“Don’t touch me.” He flinched as Alexandra reached for him again, and hurried to increase the distance to the wolf who groaned.

“Jesus.” Alexandra stared at him. “Are you okay?”

“You didn’t hurt your arm?”

“Why don’t you go upstairs. I’ll call an ambulance and close up.”

Torbjorn nodded. An ambulance was a bad idea. No one wanted shifters in a hospital, least of all the shifters who ended up there. He dropped the rolling pin. The sound as it hit the floor made him jump.

“I don’t think he needs an ambulance.”

Torbjorn looked at the wolf and jumped again. Amber eyes were fixed on him.

“No, he’s not.” A shiver went through Torbjorn. He would not acknowledge the pull or what it meant.