I’ve had a good reading month. Not in the way that I’ve read loads and loads, but what I’ve read, I’ve really enjoyed.

I’ll start with my least favourite of the month – that does not mean I didn’t like it! I wanted something short, and this is short, and it sounded cute. It was cute, though a bit too insta-love for my taste. Still, it kept me entertained.

***PREVIOUSLY PUBLISHED AS PART OF AN ANTHOLOGY***

This SHORT STORY (15k words) was previously published as part of the Heart2Heart Vol 2 Anthology but is now being offered as a single title since the anthology is no longer available. Please make sure you haven’t already purchased this story as part of that anthology unless your intent is to own two copies of the story. There is no new content.

Dressed appropriately for quiet night at home? Check.
Spoiled, needy cat present? Check.
Gorgeous, mysterious stranger randomly showing up at my door claiming to have a date with me? Wait… what?

Knox is exactly the kind of guy my ugly past has taught me to avoid, but when the heavily tattooed biker shows up at my door with flowers and a gentle touch, I’m kind of a goner. But agreeing to the blind date I knew nothing about is just the start of a crazy night of ogres, onions, wine and dangly bits.

Way too many dangly bits.

I knew letting myself get set up on a blind date was a bad idea, but I can’t deny that there’s a little part of me that really wants to find Mr. Right. Especially after having been with Mr. Wrong for so long. And everything about Orion “Ryan” Abernathy screams right. But when the cute, young social worker has no idea who I am or what I’m talking about, I know we’ve both been set up.

I fully expect my chance at finding out if Ryan is my Mr. Right to go up in smoke, but when he agrees to go out with me, I’m certain not even the hint of a haunted past can come between us.

Problem is, it’s not his past that comes between us, but a whole lot of naked old man.

Leave it to me to manage to finally find Mr. Right only to scare him off when our first date goes oh so wrong.

Ghost of Lies by Alice Winters

Next up was Ghost of Lies. I love mediums, and I’ve been glancing at this many times but 415 pages feel a bit intimidating with my attention span. I gave it a go, and I really liked it. Ghosts are always cool, and while reading, I kept telling myself I need to write more stories with ghosts in them.

Hiro
Though I was born with the ability to see the dead, I struggled with it until my brother was killed and his ghost was left behind. Now, I’m determined to figure out who is responsible for his death… the problem is that Detective Maddox Booker, the one working the case, is a grumpy and stubborn man who wants nothing to do with me and definitely doesn’t believe in ghosts. It doesn’t help that I keep finding myself looking ridiculous in front of the detective, thanks to interfering ghosts who enjoy laughing at my expense. Still, the more I’m around Maddox, the more I realize that beneath that surly exterior is a kind and caring man who will do anything to help.

Maddox
When another man dies, I know we have a serial killer on our hands—the same murderer who has remained elusive for a year and a half. To add to my frustration, I keep running into Hiro at crime scenes only to hear him claim that he can talk to ghosts. The words of the dead could lead us to the serial killer and even tell us who is next, but ghosts? There’s no such thing as ghosts. Hiro is determined and charming, and no matter what I do, I can’t stop letting him get involved. He’s definitely snagged my attention, but when he nearly winds up dead, I know he’s getting closer to the truth—and if I don’t do something soon, he might be next.

Dragon Ever After by Louisa Masters

A little while back, I read Spirited Situation by Louisa Masters, my first ever Louisa Masters, and I enjoyed it a lot. This, this was even better! I’ve been looking at How to Date a Dragon in the YBBB giveaway, but I still haven’t downloaded a single story from there – I need to grab a few – and now I wish I had read that before I read this. But it doesn’t matter. I was laughing out loud while waiting for the ‘danger’ to happen, but it never did. It was a restful, funny, cute read with a dragon shifter and a cat shifter. Awesome. I’m so glad I read it.

Note to self: You can’t teach an old dragon new tricks … he likes to invent his own.

After half a century of chaos, my retirement from leading the Community of Species Government has been bliss. No more hellhounds playing pranks. No more snippy demons demanding my attention. No more cajoling money from the wealthy to support the community. Just peace while I avoid my overbearing father and try to work out what my next steps will be.

Although… maybe three years of peace is enough. It might even be starting to get… boring. In fact, an adolescent dragon crash-landing on my landlord’s shed is just the kind of excitement I need—especially when he brings his species leader to my door.

Brandt. Wing leader of all dragons, suave, sexy, and … slightly unhinged. It doesn’t take much for him to convince me to give up my solitude and spend some time getting to know him. It’s hard to care about the future when I’ve got a dragon of my own to “play” with. Naked dragon rides for the win, right?

But Brandt’s the leader of his people, on call for them all the time, and I’ve left that part of my life behind me. Plus my father insists I should fulfil my duty to the family by getting a nine-to-five job and “marrying well.” That’s not what I want, but riding herd on a group of beings who fly, breathe fire, and could literally crush me beneath their feet would be a huge challenge, especially since Brandt’s kind of loose with rules.

It all comes down to how much I want my very own dragon ever after.

This exciting spin-off from the Hidden Species series kicks off with Percy’s story.

Secrets and Scrabble by Josh Lanyon

Now… I’ve said it before, and I’ll probably say it again. Josh Lanyon is an awesome writer. When I don’t know what to read, I pick Lanyon or Mary Calmes depending on what I’m in the mood for, but I’m not a Lanyon fangirl. Again, don’t get me wrong, she can write, the mysteries are good, the characters great and so on, but I’m seldom…touched.
I’ve been looking at Murder at Pirate’s Cove many times, I really like the cover, and now I finally read it. I was surprised by how much I liked it, so I read the second book two, right after. Right after! I usually need a break, and that break often turns into years, before I pick up the second book in a series, but I was all for creepy houses, pirates, and scrabble. Then I realised how many books there are in this series, and my soul died a little LOL. But hey, I read two, and I was thoroughly enjoying myself.

Ellery Page, aspiring screenwriter, Scrabble champion and guy-with-worst-luck-in-the-world-when-it-comes-to-dating, is ready to make a change. So when he learns he’s inherited both a failing bookstore and a falling-down mansion in the quaint seaside village of Pirate’s Cove on Buck Island, Rhode Island, it’s full steam ahead!

Sure enough, the village is charming, its residents amusingly eccentric, and widowed police chief Jack Carson is decidedly yummy (though probably as straight as he is stern). However, the bookstore is failing, the mansion is falling down, and there’s that little drawback of finding rival bookseller–and head of the unwelcoming-committee–Trevor Maples dead during the annual Buccaneer Days celebration.

Still, it could be worse. And once Police Chief Carson learns Trevor was killed with the cutlass hanging over the door of Ellery’s bookstore, it is.

**This story contains NO on-screen sex or violence. 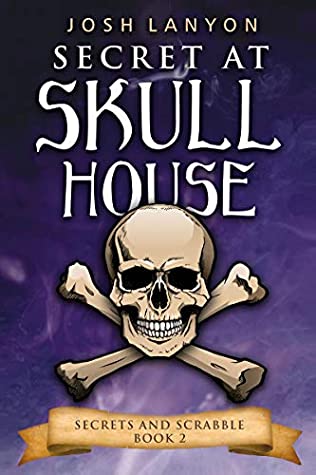 Unlike everyone else in Pirate’s Cove, Ellery Page, aspiring screenwriter, reigning Scrabble champion, and occasionally clueless owner of the village’s only mystery bookstore, is anything but thrilled when famed horror author Brandon Abbott announces he’s purchased legendary Skull House and plans to live there permanently.

Ellery and Brandon have history. Their relationship ended badly and the last thing Ellery wants is a chance to patch things up–especially when his relationship with Police Chief Jack Carson is just getting interesting. But then, maybe Brandon isn’t all that interested in getting back together either, because he seems a lot more interested in asking questions about the bloodstained past of his new home than discussing a possible future with Ellery. What is Brandon really up to?

Ellery will have to unscramble that particular puzzle post haste. Because after his former flame disappears following their loud and public argument, Ellery seems to be Police Chief Carson’s first–and only–suspect.


***This story contains no on-screen sex or violence

You Get Full Credit For Being Alive by Cari Z.

Last, but not least, the reread of the month. You Get Full Credit for Being Alive is awesome, and I’m chatting more about it over at Holly’s blog, so have a look there if you want. It’s a freebie, so grab it if you haven’t read it!

I was never one of the good guys. Never got along with people and never felt the need to. I did a lot for money. Even killed, especially killed, but never without a good reason. After years in this violent business I retired to a quiet life in the woods because I was sick of all the blood. No one knows me here and everything was fine until that night…

First I didn’t see the body through all the rain and darkness but when I drew near I saw him. Thought he was dead with all the blood. But he wasn’t and I considered for a moment to end the job because really… it would have been a mercy kill. He wouldn’t survive those injuries and even if he did he would be a vegetable. I mean… look at that head wound!

But something in the way he was dumped on the back of my property in his ripped police uniform and the word FAG scrawled on his chest made me help him.

So now I’m here. His guardian angel, kind of ironic considering what I did in the past. I watch over his recovery, standing in the shadows where no one can see me.