Nell Iris is back on the blog 🥳 She’s here to let us know a little about her newest release, After Marcus. Welcome, Nell!

Ho-ho-ho, it’s me again. Nell. The wonderful Ofelia has yet again been kind enough to allow me to visit and talk about my newest release (and if you knew just how last minute this post was, you’d realize what a great person she is!) 😍

After Marcus is about Ossian who unexpectedly lost his husband Marcus three years ago, and his neighbor, friend, and rock Joar, who stood by Ossian after his husband’s death. It’s a short and emotional story about finding love a second time around.

There’s one thing that always bugs me in books and movies and the likes when one character is about to die: the moment when they tell their partner Promise me you’ll find someone else when I’m gone. I guess it’s supposed to be romantic, I guess it’s supposed to show that the person speaking the words has a huge heart and wants what’s best for their partner even after they’ve passed.

And okay. I get the sentiment. But I’m a selfish b*tch; if I was on my deathbed, I wouldn’t tell my husband to go forth and replace me. I’ve loved him since I was 17, how could I say it and mean it? Would I want my generous teddy bear with the huge heart to be forever alone after I’m gone? No. Of course not. But he wouldn’t be alone if he moved in with our daughter and grandbaby, right? 😊 And if he finds someone else after I’m gone, that’s okay because I won’t know about it.

I’m sure you’re asking yourselves Why are you rambling about this, Nell? Because Ossian’s now-deceased husband once said that to him. “If I die before you, I want you to find someone else.” Ossian was furious with him and didn’t want to hear him saying things like that, but then he got to experience it long before he expected to.

But even as time passes and mellows the pain, and as Ossian’s heart starts to flutter in the presence of someone else, he struggles with these new emotions. Even though he knows he’d have Marcus’s blessing, even though he doesn’t want to be alone, he feels like it’s wrong.

Luckily, Joar is understanding. And patient. And smoking hot…at least according to Ossian 😍 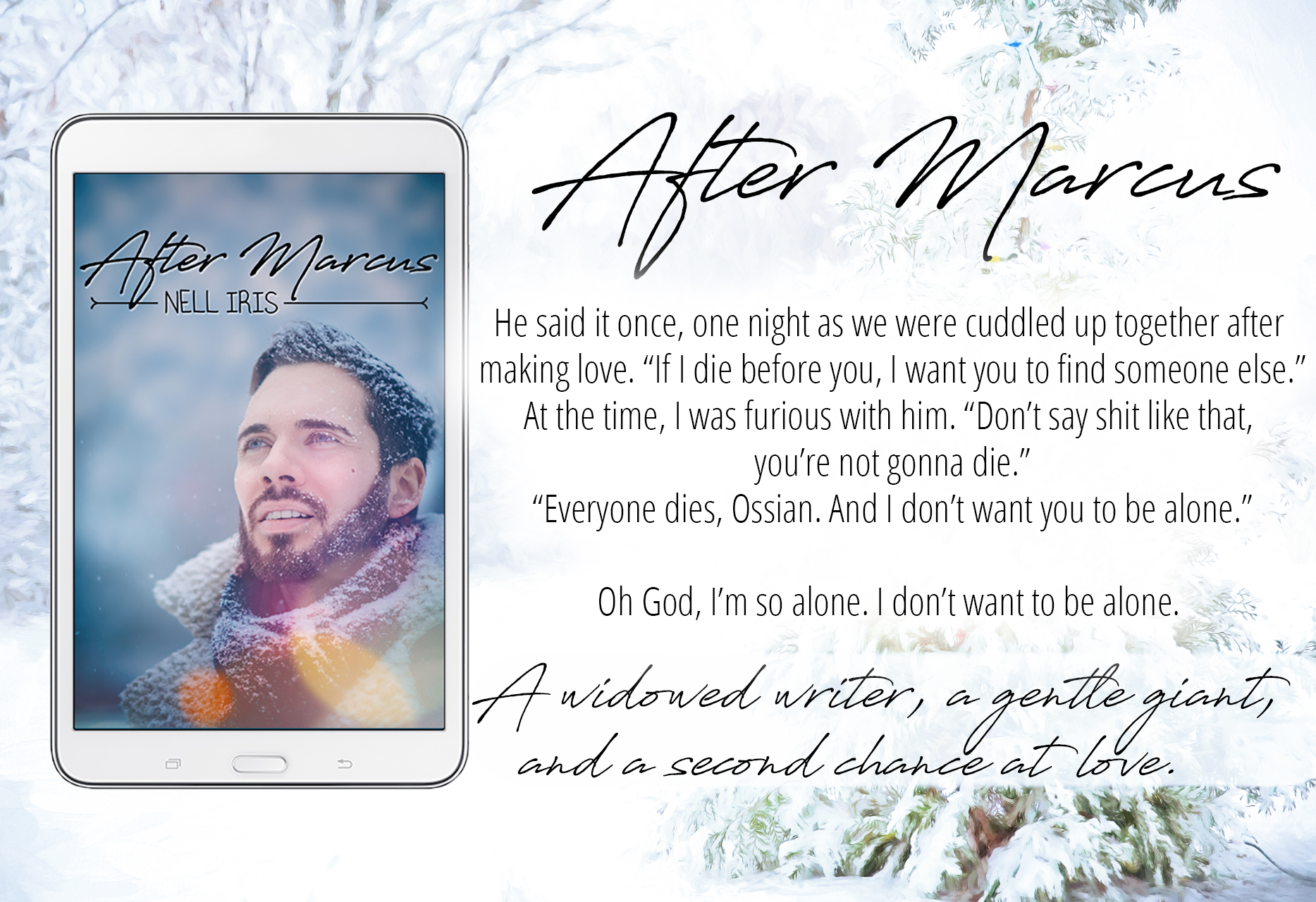 Ossian’s heart shattered when his husband Marcus died unexpectantly. He shut down, put his life on hold, and would’ve wasted away had it not been for his neighbor, Joar.

Joar was there when Ossian needed him, offered a friendly shoulder to cry on, convinced him to eat, and helped coax him back to the living.

Three years after the life-altering event, Ossian starts seeing Joar in a different light, awakening feelings he thought were dead forever. But is Ossian ready to take the leap and open his heart to someone new? And does Joar feel the same?

Nell Iris is a romantic at heart who believes everyone deserves a happy ending. She’s a bonafide bookworm (learned to read long before she started school), wouldn’t dream of going anywhere without something to read (not even the ladies’ room), loves music (and singing along at the top of her voice but she’s no Celine Dion), and is a real Star Trek nerd (Make it so). She loves words, bullet journals, poetry, wine, coffee-flavored kisses, and fika (a Swedish cultural thing involving coffee and pastry!)

Nell believes passionately in equality for all regardless of race, gender or sexuality, and wants to make the world a better, less hateful, place.

Nell is a bisexual Swedish woman married to the love of her life, a proud mama of a grown daughter, and is approaching 50 faster than she’d like. She lives in the south of Sweden where she spends her days thinking up stories about people falling in love. After dreaming about being a writer for most of her life, she finally was in a place where she could pursue her dream and released her first book in 2017.

“Hey you,” I say, caressing the headstone, knowing he’d be so pissed off at me for driving on a pitch-black December night and in such awful weather conditions.

What’s so important you need to risk your fucking life?

A dead guy is never more important than your life, precious.

Precious. He never used endearments unless he was being ironic or upset at me for some reason.

His imaginary voice in my mind is right, though. I was irresponsible driving here, barely paying attention, after not sleeping at all. I’m lucky I managed in one piece.

It’s past four in the morning and the winds have picked up, sneaking underneath my clothing, whirling the falling snow around me until it finds its way into my ears, underneath my scarf, attacking me from every direction. I need to stand up right now and leave, or I won’t be able to drive home.

But I remain in my spot, needing to be close to him.

You’d be closer to me in our home, my treasure. These are just my cremated bones, they’re not me.

I know. His presence still lingers everywhere in the house we bought ten years ago when we needed to get out of the city. The people, the cars, the constant noise levels were all stressing me out, making it impossible for me to focus on my writing. When Marcus got a job offer from another university, we leaped at the chance to get out. That’s when we bought the house.

We met Joar the second day after our moving truck had dropped us and all our belongings off in our new home in the forest.

Marcus was the first to spot him as he came walking through the trees. “Oh-oooh, here comes trouble,” he said, and when I joined him by the window, I could understand his concerns.

“The trouble” my husband referred to of course Joar and even at a distance, he was huge, and he was dressed from head to toe in camo clothing. His long legs ate up the distance between the forest line and our house, and as he approached, I noticed the rifle resting in the crook of his elbow. But the weapon was open, the double barrel pointing down, and even though his face was serious, he didn’t look angry or menacing.

“Stay here,” Marcus said and stepped out onto the porch.

I snorted. His protective streak was ridiculous, but he knew better than to try to get me to stay put like I was a spoiled lapdog. I followed him outside, stepped into his space, close enough for our shoulders to touch, and slid my hand into his. Together, united as always, we waited as Joar approached.

Joar didn’t blink an eye at us holding hands. He just introduced himself, told us he lived further up the road, and welcomed us to the neighborhood before he left again, disappearing into the forest to go hunting.

“He was unexpectedly nice,” Marcus said after Joar left.

“Don’t be a judgmental jerk,” I said. “He doesn’t have to be a bad guy just because he looks a little rough.”

“Yeah, but the rifle didn’t help the impression that he’s not going to be on Santa’s nice-list this year.”

“Well, look at you. You look like a perfectly respectable, dry professor in your tweed jackets, but you’re definitely on Santa’s naughty list.” I pinched his ass.

“I am a respectable, dry professor.”

I stepped into his space, so close our noses touched, and grabbed his crotch. “You’re a professor, yes. But you won’t be dry,” I gave his dick a good squeeze, “when I’m finished with you.”

Marcus chuckled. “Seriously, Ossian, you need to work on your seduction technique.”

I flipped open his jeans and shoved my hand into his briefs.

I jerk out of the memory and shake it off; it feels wrong to think about things like that in a cemetery. Is it even allowed?

Don’t be a prude, Ossian. It’s not like you.

No, I never was a prude. I couldn’t keep my hands off Marcus, not even after being with him for close to twenty years. His body, his mind always excited me in a way that no one ever had before I met him. And all those feelings died with him. When he was no longer around, my body shut down.

My grief counselor said it was natural, that it was a part of the process, but I never really believed her. I was so certain I was going to live out the rest of my life like a dry husk, feeling nothing but pain and sadness. I’d never experience closeness again, or the exhilaration of being turned on by another person.

Seems I was wrong.

I don’t know when things changed, when my body started thawing, even warming up to someone else.

It seems to me you’re more than warmed up, baby.

You know I wouldn’t.

I do know. He said it once, one night as we were cuddled up together after making love. “If I die before you, I want you to find someone else.”

At the time, I was furious with him. “Don’t say shit like that, you’re not gonna die.”

“Everyone dies, Ossian. And I don’t want you to be alone.”