“A shop that would undoubtedly contain people or other equally horrible creatures.”

What can I say, Mister Cole is a man I can relate to. For the last four days, I’ve spent every minute I’ve been able to spare with this copper-enhanced man who growls more than not, shoots first and cleans up the blood later, and needs coffee like normal people need air. As I said, he’s a man I can relate to.

I love The Disassembled Life of Duncan Cole by S. Hart. I can’t believe I’ve had it for two years without reading it. I think it might have been pushed down on my to-read list because it’s steampunk and I don’t normally read that even though I have a thing for men with metal. And since I have a thing for dead men too I’m enjoying the heck out of this one. I don’t know how it ends, have about 20% left, but how can you not love a man whose lover describes him as:

“A man so dense that train couldn’t penetrate his skull, he even refuses to acknowledge that’s he’s attractive because he has some daddy issues, although his issues with his mother seem to be far worse. So stupid that he’s trying to get a man pregnant, I mean, really.” 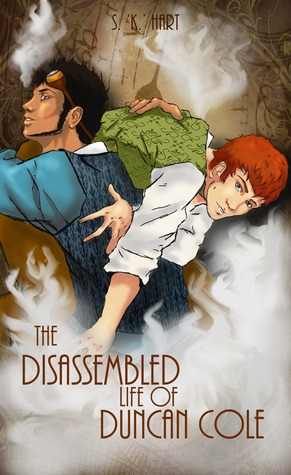 In which we meet Duncan: professional nobody who presents himself to the public as a scowling, smoking pile of contempt. Against his will, he meets Sam: a less than professional coal miner who inspires the worst in men. Together they take on one malicious train and a most insidious re-animator, and along the way Duncan remembers a few things that he’d previously forgotten.