Friday again! But it isn’t a normal Friday, I know that it is to most of you out there, but here in Sweden, it’s a holiday. It’s Midsummer Eve which means you’ll eat pickled herring, strawberries, have a nubbe (shot of vodka) or five, and then everyone will be dancing around a maypole. It’s just the way it is.

Now to the reading! I’ve just started Oleander House (Bay City Paranormal Investigations #1) by Ally Blue. Ally Blue is one of those authors who doesn’t always work for me, and I’m afraid Oleander House has failed to hook me. I’m only three chapters in though so maybe it’ll change.

There is a warning of intense violence and there has already been some hinting at gruesome deaths happening in the house so I’m hoping some evil demon will reach out through the screen and grab hold of me as I go on reading. From what I can see on Goodreads there are 4,900 ratings on this series and most of those readers have enjoyed it, so I’ll keep at it for a bit longer. 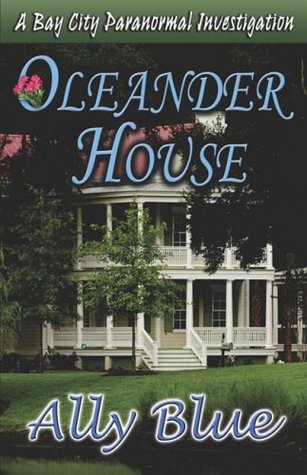 When Sam Raintree goes to work for Bay City Paranormal Investigations, he expects his quiet life to change–he doesn’t expect to put his life and sanity on the line, or to fall for a man he can never have.

Book One in the Bay City Paranormal Investigation series.

Sam Raintree has never been normal. All his life, he’s experienced things he can’t explain. Things that have colored his view of the world and of himself. So taking a job as a paranormal investigator seems like a perfect fit. His new co-workers, he figures, don’t have to know he’s gay.

From the moment they meet, Sam is strongly attracted to his intelligent, alluring boss. It doesn’t take Sam long to figure out that although Bo has led a heterosexual life, he is very much in the closet, and wants Sam as badly as Sam wants him.

As the investigation of Oleander House progresses and paranormal events in the house escalate, Sam and Bo circle warily around their mutual attraction, until a single night of bloodshed and revelation changes their lives forever.