It’s Friday in NaNo times, my MIL is on the incoming, and I really need to vacuum before she gets here. In other words, I’ll keep it short today.  I’m about halfway through Lyssa Dering‘s Babyvamp, my first ever Lyssa Dering story.

I’m enjoying it so far. Max is on his way from having fed when he comes across a newborn, a newly turned vampire, who is in a hunger haze. He takes in the new vamp and even though he should go to the vampire police he doesn’t. When he finds out the new vamp’s maker is his own things get complicated.

I like that even though Max is a very nice individual who cares for everyone around him, this is a rather bloody little tale. It’s also nice that the vampires are a part of the society—there is a police department for vampires, rules about how vampires should create new vampires, blood escort services etc. It makes a well thought through story.

If you like vampires, you should check it out! 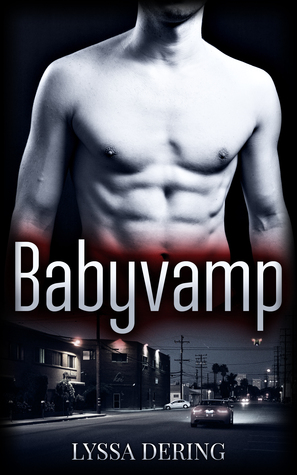 Forty-four-year-old vampire Max lives a mostly solitary existence in an attempt to avoid “vampire drama,” but when he spots abandoned babyvamp Kieran on his way to the club one night, his pesky conscience demands that he rescue him and confront the vampire who turned him. Problem is, Kieran’s creator is Max’s ex-lover James, an emotionally abusive, older vampire whose very presence throws Max into a heart-beating panic. James isn’t happy that Kieran tattled on him, and he’ll do whatever it takes to keep Max from divulging his offense to the vampire police, including risking Kieran’s life to make Max his rightful guardian. But Max never wanted to be anyone’s guardian. And if Kieran gets his way, he’ll have more than Max’s constant care and attention. He’ll have his sexual submission, too.