It’s time to start the holiday reads, is it not? I think it is, half of November has gone and before we now it Santa is stuck in the chimney. My first holiday read of the year is Mate Wanted for Christmas by Angelique Voisen. I saw someone list free M/M Christmas stories somewhere and this was one of them. Since I was in the mood for a paranormal read I snuggled up in bed and started reading.

Mate Wanted for Christmas is a short cute story about second chances and about moving on. Pat is a bear shifter with an aversion to alarm clocks. He lost his mate in a car crash ten years ago and every year he’s putting out an ad looking for a date with someone acting as his husband. No one ever responds until, all of a sudden, someone does. Former soldier Jacob has no job and nowhere to go so why not go on a date with a crazy bear shifter?

This is a story you read in one go. It’s written in present tense which threw me a little in the beginning but I got used to it. I wouldn’t have minded seeing a little more of Pat’s shifter side, though. 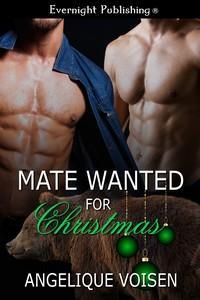 For the last decade, bear shifter Pat Singer posted a specific want ad in the December newspaper. Each year, Pat gets the same response—zero. Except this year’s different. Finally, someone agrees to role-play Pat’s dead mate.

Spending Christmas Eve with a rich psycho shifter might seem unreasonable to some. To survive the harsh winter, former soldier Jacob Reynolds has no choice but to turn to desperate measures…except Pat Singer isn’t the crazy bastard Jacob imagines him to be.

The sexy, but reluctant werebear pushes all of Jacob’s right buttons, and if Jacob doesn’t guard his heart, he might end up getting burned.