There are two men, 42 and 19, they know they have to do something before they run out of time. They remember stuff. They know HQ is watching them. They know the clock is ticking.

Up for a mind fuck? Check this book out. I’ve read all but one of Davis & Stewart’s books and went in with a certain expectation (Shut Your Face, Anthony Pace! is one of my favourite books) but a few pages in I realised it was time to put those expectations aside. The language is there, the usual poetic voice of Davis and Stewart, the romance is there but not in that straight line M/M way, and there is plenty of humour. I had several good laughs, but this is a gritty read. The characters are exposed and vulnerable in their confusion and urgency. And a certain dancer should be flogged for his actions.

I realise that if you’ve read this far you probably haven’t got a clue what I’m talking about but I’m gonna leave it at that. If I say more about the plot (did I say anything?) I’ll spoiler it. What I can say is that you won’t figure this mystery out until the very end. When I realised what was going on I wanted to hit myself on the head for not getting it sooner – the clues are there! LOL 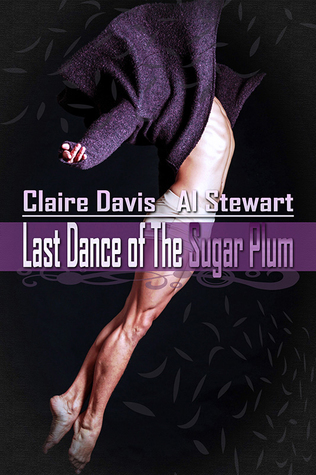 Jonathan is a spy.

Jonathan is a spy with a code implanted deep in his subconscious, so deeply he can’t remember—anything at all.

Anton is an interrogator intent on retrieving the code, whatever the cost.

But sometimes they dream of dark tunnels and locked-up rooms, and then they both scream.

Along comes Harry, who seems to have all the answers…but who is he, and which side is he on?

For many months, Jonathan and Anton live apart from the world in a hazy, dreamlike state, only interrupted by interrogations and a healthy fear of HQ. One day, they watch a dance performance, and memories begin to unwind… A ticking clock… Betrayal… Missions… Always the scent of oranges. But with clarity, comes a return of powerful emotions…

Last Dance of The Sugar Plum is an exciting spy thriller with as many twists and turns as a maze.