Today I’ve read The Gate by A.L. Lester – a story that’s a little outside my comfort zone…or I don’t know if comfort zones have anything to do with it. But I usually run for the hills when I see something about WW1 or WW2. And I hardly ever read historical, and I don’t really do demons if I can help it (though I’ve read a few good ones) and gates make me think of demons and fae. So why I picked this one up, I don’t really know, but I did. I should perhaps point out that I’m not sorry I did.

Matty comes home from the war to find out his brother is dying. The local doctor thinks it’s cancer, but it’s not. The brother is obsessed with his books and papers, and before he dies he tells Matty to keep the gate shut and burn the books. Matty doesn’t really listen, though, and one night Rob lets him know there is something strange going on.

I liked that we get to see the beginning of a relationship between Matty and Rob while they’re trying to solve the mystery with the books, the gate, and the death of Matty’s brother. The story is short but well written – give it a try! 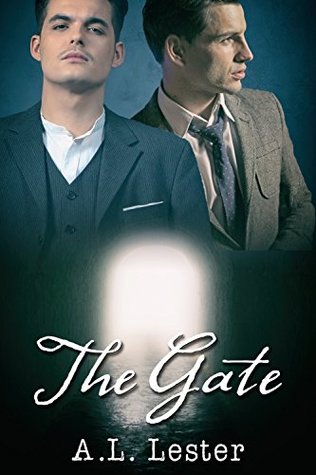 It’s 1918, and Matty returns home to the family farm from the trenches only to find his brother Arthur dying of an unknown illness. The local doctor thinks it might be cancer, but Matty becomes convinced it’s connected to the mysterious books his brother has left strewn around the house.

Matty confides his suspicions in his friend Rob, a hired hand on the farm and potential lover. Rob has found something that looks like a gate of some kind, something Arthur referenced in his papers which may rest at the heart of his illness. But a gate to where?

This short story introduces the world and characters in A.L. Lester’s novel, Lost in Time.