For years my reader friends have been raving about Josh Lanyon, read every book she’s released and so on, and I’ve never understood the frenzy. Don’t get me wrong, I’ve enjoyed the Lanyon books I’ve read, but they haven’t turned into a squealing fangirl. I’ve picked up a few books here and there, done a few buddy reads, and her writing is good, the mysteries entertaining, but when I’ve closed the book I’ve forgotten about it.

But I get it now... Winter is freaking fabulous! I loved this story so much.

Here we have a creepy old house, a main character who is so lost in his grief he is beginning to fade from the world, and a haunted mirror. The story might not be filled with surprises but damn it sent shivers down my spine LOL.

I’m so glad this is the first book in a series because I want more of Flynn and Kirk…and I want to know more about all the stuff hidden away in the basement…and Kirk, of course. There is definitely something tragic in Kirk’s past. Plus any story mentioning shrunken heads is awesome, it’s just the way it is.

If you haven’t read this is looking for something to get you in the mood for Halloween, pick this up!  You won’t be disappointed. 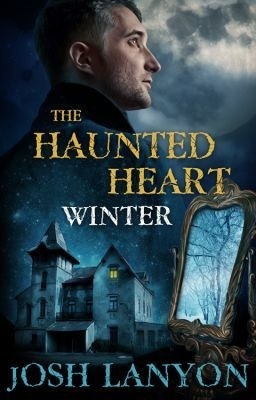 First in a NEW series!
Still grieving over the sudden death of his lover, antiques dealer Flynn Ambrose moves to the ramshackle old house on Pitch Pine Lane to catalog and sell the large inventory of arcane and oddball items that once filled his late uncle’s mysterious museum.

But not all the items are that easy to catalog. Or get rid of…

Since Alan died, Flynn isn’t eating, isn’t sleeping, and isn’t spending a lot of time looking in mirrors. But maybe he should pay a little more attention. Because something in that 18th Century mirror is looking at him.

This site contains affiliate links to products. We may receive a commission for purchases made through these links.

One thought on “Winter – The Haunted Heart”