I have no idea when I got this story, probably last year, and I had no idea it was part of a series until after I’d read it. Observant? Me? Not so much.

Now, you don’t have to read the previous books to read this one, I haven’t, and it went fabulously.

This is cute. We have a guy, Rafael, who lives alone. He lost his dog a little way back, and he spends most of his days talking to people online about paranormal stuff – ghosts mostly.

A year or so ago, Noah moved in next door, and watching him is the highlight of Rafael’s day. When Noah and his kid come trick or treating on Halloween, things start to happen.

Rafael has been hearing his dog, but you imagine you do when you lost someone. Hearing her is part of the grieving process. Right?

I enjoyed this! I was a bit surprised when I realised one character was over forty, and the other over sixty, not that I mind, I love reading about grown-up people, but the cover had me confused.

After having written this, I went to search for a buy link, but I coulnd’t find it anywhere. Then I went to Alex Silver’s website, and there I found a link. This books is avaliable for free on Prolific Works. 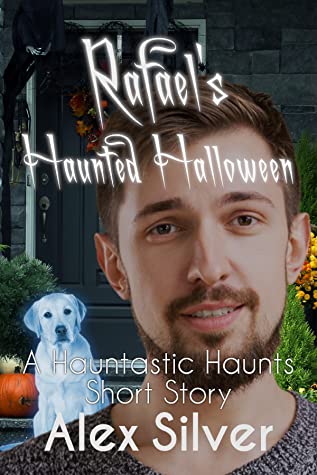 Love finds a way—even if man’s best friend has to reach across the veil to make it happen.

Semi-retired, Rafael’s life is in a rut after losing his beloved dog, Marlowe. He fills his time with hobbies, but that isn’t enough to give him purpose. The longer Raf hides from the world, the less he able he is to step out of his comfort zone in pursuit of his heart’s desire.

A recently divorced father, Noah, is ready for a new relationship. He’s had his eye on his silver fox of a next-door neighbor through months of casual flirtation. If only Raf would give him an opening, he’s sure there is chemistry between them.

Halloween evening affords Noah the perfect opportunity to get past Raf’s guard. But it might take Marlowe’s help for Raf to let go of his insecurities and give love a chance.