It’s Werewolf Wednesday! Not really, but it makes a good alliteration. I’m continuing my quest of trying to categorise what I’ve read, and since we’re getting closer to Halloween, I thought I’d start with the monsters.

Check out my page over read werewolf books.

I curse myself for not keeping better track. Before I grabbed my first prompt in the Don’t Read in the Closet event, which also was the first thing I ever published, I had a different Goodreads account where I used to have shelves for everything.

But starting out as a writer I had this brilliant idea of starting over – don’t do that, it was idiotic. Now I don’t know what I’ve read or when or even what I thought about the book because many books I’ve just clicked as read, no rating or anything. And some, when I look at them, I realise I have read them, but I don’t have them as ‘read’ on my GR account. So, stupid, very stupid.

I don’t know if you know, but it’s Asexual Awareness Week. So I figured we’d combine werewolves and asexuality and therefore I’ve read The Alpha and His Ace by Ana J. Phoenix. I’ve seen the cover around but I didn’t know it was a DRitC story until I read it – that means it’s free.

If you’ve read a few M/M werewolf stories you know that there most often is this insta-mating thing, but that’s just not gonna happen here. Brandon is one of the worst mama’s boys I’ve ever seen in a character, but he’s also the alpha of a werewolf pack. At the age of 25, he still hasn’t found his mate, which weakens him in the eyes of some pack members.

Then he finds him, his mate!

Only, Aidan is asexual and he has no intention of jumping into bed with a stranger who claims to be a wolf and that Aidan is his mate.

I enjoyed this story a lot despite wanting to shake the characters at times, but they worked it out. It’s a cute, quick read, and it’s different from the usual werewolf porn…erm, I mean romance, I often read. And the genre needs a little more diversity, so yay for Ms Phoenix.

…if you thought sex was better than cake, you just hadn’t met the right cake yet. 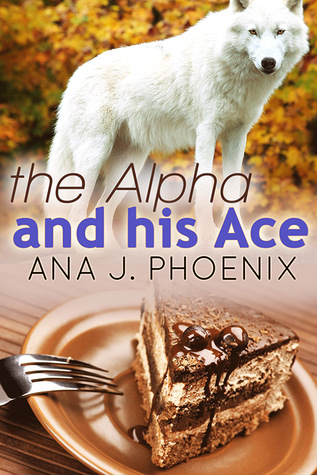 Young, handsome, and the alpha of his wolf pack, Brandon has never had trouble finding men to have sex with. Only one thing is missing–his mate. Brandon can’t find him, and the rest of his pack is growing concerned about his lack of partner. An alpha needs a strong partner.

Things seem to be looking up when he finally finds his fated companion in Aidan. One problem—Aidan’s asexual, and Brandon’s now confused. Who doesn’t want sex? Aidan, that’s who. And Brandon hasn’t got a clue how to make someone love him without it.

It’s going to take some serious self-examination, acceptance, and some really good cake for Brandon to make his way into Aidan’s heart.